4 December 2012
Amid reports of volatility in the area, the United Nations refugee agency today said it is concerned about the security of displaced people in the eastern Democratic Republic of the Congo (DRC) after an attack on a camp outside of the provincial city of Goma over the weekend.

Amid reports of volatility in the area, the United Nations refugee agency today said it is concerned about the security of displaced people in the eastern Democratic Republic of the Congo (DRC) after an attack on a camp outside of the provincial city of Goma over the weekend.

While there were no deaths or serious injuries, people’s homes and the pharmacy of the Mugunga III camp for internally displaced persons (IDPs) were looted, one person was badly beaten, and there were six unconfirmed rape cases, according to the Office of the UN High Commissioner for Refugees (UNHCR).

“Witnesses say a small group of men from outside the camp were seen monitoring food distribution earlier in the day. A few hours later, the camp was surrounded by a large number of armed men,” a UNHCR spokesperson, Adrian Edwards, told reporters in Geneva.

“They told a woman to take them to the camp leader, and then beat her. The armed men then searched tents, stealing money, mobile phones, and food that had been handed out earlier by WFP (World Food Programme),” he added. “Looting was also reported among the population living immediately adjacent to the camp.”

According to UN figures, 130,000 people have been newly displaced by the recent instability in and around Goma, the capital of the eastern province of North Kivu, since the recent occupation and subsequent withdrawal – this past weekend – of the 23 March Movement (M23) armed group, composed of soldiers who mutinied in April from the DRC national army, known by the French acronym FARDC.

In addition, there are an estimated 841,000 people who were already displaced before this latest wave of insecurity.

In an update, the UN Organization Stabilization Mission in the DRC (MONUSCO) reported today that the overall situation in the North and South Kivu provinces remains volatile, with some security vacuums are being filled by other armed groups, including various so-called Mayi-Mayi groups.

As part of its efforts to support the national army, MONUSCO deployed attack helicopters in aid of the FARDC's efforts to halt the M23 advance. The peacekeeping mission has 6,700 and 4,000 troops in the provinces of North and South Kivu, respectively, including, in some places, behind the M23 lines. North Kivu alone is four times the size of Belgium.

In Goma, the mission has some 1,500 'blue helmets.' During the M23 occupation, these peacekeepers controlled the city's airport and conducted regular patrols, in line with their mandate to provide protection for civilians.

With regard to the M23 withdrawal, MONUSCO noted that the situation in Goma remains relatively calm following the restoration of control by the national authorities, with DRC police and army units continuing to be redeployed into the city and local administrative structures becoming operational.

At the Geneva news briefing, Mr. Edwards said the rape incidents at Mugunga III camp are being investigated, along with reports that a dozen IDPs were forced to carry looted materials out of the camp before being freed.

“The incident highlights the need for security at sites for internally displaced people to be prioritized, along with improved humanitarian access so that such populations can be better cared for,” he said.

He added that the few police in the camp, which currently holds some 30,000 people, were unable to intervene, and MONUSCO peacekeepers also faced capacity constraints, and “were not in a position to maintain a permanent presence at the site. UNHCR staff who visited the camp yesterday said people in the camp were still anxious and upset.”

As well as security difficulties at the Mugunga III camp and elsewhere in the Kivus, Mr. Edwards said the refugee agency is also contending with shortages of shelters and non-food items as some 12,000 highly vulnerable families are in urgent need of blankets, kitchen sets, tarpaulins, plastic sheeting, mosquito nets, sleeping mats, jerry cans, soap, and sanitary napkins. Some 47,000 families are also in need of shelter.

Separately, in a news briefing at UN Headquarters in New York today, a UN spokesperson noted that, in Uganda's capital, Kampala, DRC Government officials have announced the planned start of discussions with the M23 in the coming days, under the auspices of Uganda in its role as chair of the regional grouping known as the International Conference of the Great Lakes Region (ICGLR).

The M23 withdrawal from Goma is in line with an ICGLR communiqué issued on 25 November, which, in addition to the establishment of a so-called neutral zone of 20 kilometres around Goma, also urged the rebel group to stop the violence and threats to depose the DRC Government.

The communiqué was issued after a meeting of the regional grouping, attended by several African heads of State, in Kampala. 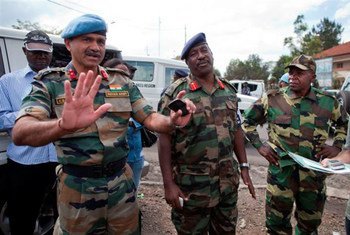 3 December 2012
The humanitarian situation in the eastern Democratic Republic of the Congo (DRC) remains “extremely worrying,” a United Nations official said today, with at least 130,000 displaced persons in and around the city of Goma who fled the fighting in the area over the past two weeks and are in urgent need of basic services.