4 December 2012
Botswanan pottery-making, Indonesian handicrafts, traditional Kyrgyz carpet-threading, and the music and dance of Uganda’s Busoga people are the new elements added today to the United Nations-endorsed list of the world’s intangible cultural heritage – part of the world body’s ongoing efforts to preserve endangered practices from fading into extinction.

Botswanan pottery-making, Indonesian handicrafts, traditional Kyrgyz carpet-threading, and the music and dance of Uganda’s Busoga people are the new elements added today to the United Nations-endorsed list of the world’s intangible cultural heritage – part of the world body’s ongoing efforts to preserve endangered practices from fading into extinction.

The four traditions were inscribed on the UN Educational, Scientific and Cultural Organization (UNESCO) List of Intangible Cultural Heritage in Need of Urgent Safeguarding, after being chosen by a committee that is meeting at UNESCO headquarters in Paris this week.

According to UNESCO, the importance of intangible cultural heritage is not the cultural manifestation itself but “rather the wealth of knowledge and skills that is transmitted through it from one generation to the next.”

The agency adds that as older generations pass away and younger generations adapt to a more globalized and modern world, ancient traditions – and the know-how necessary to maintain them – often vanish from the collective memory of a people, their only trace left in anthologies and history books.

The earthenware pottery-making skills of Botswana’s Kgatleng District, for instance, is at risk of extinction due to the decreasing number of master potters, low prices for finished goods and the increasing use of mass-produced containers. Similarly, the woven bags created by Indonesia’s Papua people face stiff competition from industrially manufactured bags.

In Kyrgyzstan, the traditional art of felt carpet-making is also at risk of disappearing as the communal enterprise, frequently led by women in rural and mountain communities, laments a diminishing number of practitioners and a lack of governmental safeguarding. And Bigwala, the traditional song and dance of Uganda’s Busoga Kingdom, also faces a threat to its survival with only four older masters with the skills for performing still remaining.

To be inscribed by the committee, elements must comply with a series of criteria, including contributing to spreading the knowledge of intangible cultural heritage and promoting awareness of its importance.

The List was inaugurated in November 2008 in accordance with UNESCO’s Convention for the Safeguarding of Intangible Cultural Heritage, which seeks to protect the world’s oral traditions, performing arts, social practices, craftsmanship and knowledge of nature.

Before its current session ends on Friday, the committee is expected to evaluate another two nominations – from China and Mexico – for possible inclusion on the intangible heritage list. 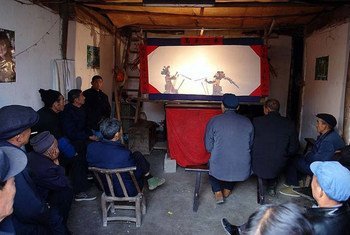 26 November 2011
Two elements from Belgium and China were today added to the United Nations-backed list aimed at preserving and spotlighting the planet's most valuable intangible heritage.