UNHCR/J. Björgvinsson
A mother and her children at a detention centre in Greece.
3 December 2012

A United Nations independent expert today called on Greece to boost measures to protect the rights of migrants, while stressing that it is also the European Union’s (EU) responsibility to address the plight of a growing number of irregular migrants trapped in the Mediterranean country on their way to European destinations.

“As the large number of irregular migrants stuck in Greece is mainly a result of EU policies and practices, there is a strong need for solidarity and responsibility-sharing within the EU in order to ensure full respect of the human rights of all these migrants,” the Special Rapporteur on the human rights of migrants, François Crépeau, said at the end of a nine-day visit to Greece.

During his trip, Mr. Crépeau spoke with many Greek interlocutors who expressed dismay at the reluctance of other EU countries at taking on a number of migrants stuck in Greece with little possibility of being returned home, as well as little chance of being integrated in the local labour market and society, given the economic crisis the country is going through.

Mr. Crépeau underlined that while it is the EU’s role to manage migration flows to Greece, the Greek Government needs to respect the human rights of migrants.

“I urge the Greek authorities to undertake all the necessary measures to combat discrimination against migrants,” he said. “I am deeply concerned about the widespread xenophobic violence and attacks against migrants in Greece, and I strongly condemn the inadequate response by the law enforcement agencies to curb this violence, and to punish those responsible.”

In particular, the Special Rapporteur drew attention to a new policy implemented by the Greek Government which systematically detains everyone that is detected as irregularly entering the Greek territory, including children and families. Separated or unaccompanied children are let go without an official status in the country.

“There does not seem to exist a clear, coherent strategy as to what to do with irregular migrants who are not clearly and easily deportable,” Mr. Crépeau said. “I met migrant children who lived in abandoned buildings or under highway overpasses, without any proper status and without any institutional support apart from the action of some civil society organizations.”

He added that this policy leaves individuals in a state of legal limbo and goes against a human rights framework.

A plan for a civilian asylum and first reception service in Greece that would effectively and quickly screen migrants with vulnerabilities has been supported by the EU. However, Mr. Crépeau said not enough financing has been received to fund these services.

“I am concerned by the lack of appropriate staffing and budget yet dedicated to these two services, and I urge the Greek government and the EU to work together in order to ensure their swift operationalization.”

While in Greece, Mr. Crépeau visited Athens, the Evros region bordering Turkey, the Aegean island of Lesbos, and the western port city of Patras. He met with Government representatives, civil society and international organizations, as well as migrants themselves, including in detention centres.

Mr. Crépeau’s visit was the last stage of a special study on the management of the EU’s external borders. He visited Brussels in May, Tunisia and Turkey over the summer and Italy in October. The Special Rapporteur will present a report on his findings to the UN Human Rights Council in June next year.

Independent experts, or special rapporteurs like Mr. Crépeau, are appointed by the Geneva-based Council to examine and report back on a country situation or a specific human rights theme. The positions are honorary and the experts are not UN staff, nor are they paid for their work. 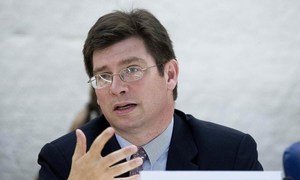