UN Photo/Evan Schneider
Secretary-General Ban Ki-moon (centre) and General Assembly President Vuk Jeremic (left) at a special meeting of the Committee on the Exercise of the Inalienable Rights of the Palestinian People.
29 November 2012

United Nations Secretary General Ban Ki-moon today called on Israel and the Palestinians to find the “political will and courage” to move ahead with talks aimed at establishing a lasting peace between them through Palestinian statehood and security for Israel.

Speaking as the UN General Assembly prepared to vote on whether to grant Palestine a UN status that remained short of full statehood, Mr. Ban said that realizing the so-called two-State solution to the decades-long conflict was now “more urgent than ever” as political changes sweep across the Middle East.

“Sixty-five years ago, the United Nations General Assembly adopted resolution 181, proposing the partition of the mandate territory into two States,” Mr. Ban said in reference to the 29 November 1947 resolution that called for the division of the former British mandate for Palestine. “Sixty-five years later, this vision of a two-state solution remains tragically unfulfilled.”

Mr. Ban was addressing the UN’s Committee on the Exercise of the Inalienable Rights of the Palestinian People which, created by the Assembly in 1975, serves as the sole UN body devoted exclusively to issues related to Palestine.

The Committee was meeting in its annual observance of the International Day of Solidarity with the Palestinian People, which the Assembly set in 1977 for 29 November in recognition of its 1947 ‘partition’ resolution.

Addressing the same event, the UN General Assembly President, Vuk Jeremic, said he believed the continued absence of a state for Palestinians was “one of the world’s most fundamental wrongs.”

“It stands in the face (of) the central tenet of the UN Charter: to create a workable system that not only helps to prevent conflicts, but asserts the pre-eminence of justice – pledging not only equal rights to all nations, but ensuring their equal dignity as well,” Mr. Jeremic said.

“Millions of Palestinians continue to live in poverty in the myriad camps scattered throughout the Middle East,” he noted. Five million Palestinians are recognized by the UN as refugees who trace their roots to those displaced following the division of the Palestine mandate.

Many of Mr. Ban’s comments were reflected in an earlier message he issued to mark the International Day.

Both Mr. Ban and Mr. Jeremic referred to today’s Palestinian-status vote in the General Assembly, which is asking Member States to decide whether to recognize Palestine as a Non-member Observer State of the UN. The current Palestinian status at the UN is that of observer entity.

Mr. Ban said today’s status question was one for Member States to decide as he added that “efforts should be focused… on relaunching meaningful negotiations, which are the only way to resolve all permanent status issues.”

“I call on Israeli and Palestinian leaders to breathe new life into the peace process, which is now on life support,” Mr. Ban stated. ‘I urge the international community to help them forge a credible political path that will realize the legitimate aspirations of both sides.”

Noting a number of key initiatives over the years at the UN and beyond in search of a solution, Mr. Ban said that “what is needed now is political will and courage.”

Mr. Jeremic said it was “crucial for the Palestinians and Israelis to transform (the vote’s) effects into an opportunity to return to the negotiating table” – regardless of the outcome.

“The goal must be to repair the breech, and to achieve at long last, what was envisioned in 1947,” he said.

Other speakers included the Palestinian Ambassador to the UN, Riyad Mansour, and the current President of the UN Security Council, Ambassador Hardeep Singh Puri of India.

Palestinians led by Palestinian National Authority President Mahmoud Abbas reportedly seek a Palestinian state in the West Bank, Gaza and East Jerusalem. A bid by the Palestinians to apply for full UN membership stalled last year when the 15-nation UN Security Council, which decides whether or not to recommend admission by the 193-nation General Assembly, said it had been “unable to make a unanimous recommendation.”

Tension in the region increased as violence broke out earlier this month, with rocket attacks against Israel from the Gaza Strip and Israeli airstrikes on Palestinian enclave. The eight days of violence left an estimated 158 Palestinians dead, including 103 civilians, and approximately 1,269 injured. Six Israelis – four civilians and two soldiers – were reportedly killed by Palestinian rocket fire and 224 Israelis were injured, the vast majority civilians. 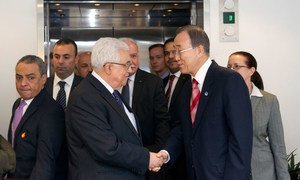 United Nations Secretary-General Ban Ki-moon today stressed the urgency of stepping up efforts to get the Middle East peace process back on track, and urged Israelis and Palestinians to show courageous leadership to reach a two-State solution.