Marcel Crozet/ILO
Heads of UN agencies launch the “Getting to Zero at Work” campaign in Geneva.
29 November 2012

The United Nations today launched a campaign that seeks to promote the rights of people living with HIV and combat discrimination against them in the workplace.

“Today, we must all together, governments, employers’ and workers’ organizations – the ILO’s constituents – and other stakeholders, recommit to protecting the human rights of people living with HIV so that they may enjoy productive work and live in dignity,” said the Director-General of the International Labour Organization (ILO), Guy Ryder, at the campaign’s launch in Geneva.

“Freedom from discrimination – a fundamental principle and right at work – is a basic starting point in getting to zero. Together we can,” he added.

According to ILO, more than 30 million people living with HIV who are of working age still face a high level of discrimination, which prevents or limits their access to jobs. Young people of working age account for over 40 per cent of new HIV infections globally each year.

The ‘Getting to Zero at Work’ campaign, launched just days ahead of World AIDS Day on Saturday, aims to promote ILO’s recommendations concerning HIV and AIDS in the workplace, which address the promotion of human rights, job security, and better access to HIV prevention, treatment, care and support services from a workplace perspective.

“The most challenging objective is zero discrimination,” said the Director of the Executive Office of the Joint UN Programme on HIV/AIDS (UNAIDS), Luiz Loures, adding that ILO’s efforts are critical for an effective response to HIV. “The workplace is the most effective place to protect the human rights of workers and ensure a safe and supportive environment for people living with and affected by HIV.”

During the event, the Director-General of the UN World Health Organization (WHO), Margaret Chan, highlighted the role that health workers play in the AIDS response. “If countries are to achieve universal access to HIV services, one of their first steps must be to ensure that all health workers have access to effective and affordable HIV prevention, treatment and care,” she stated.

Ending discrimination against HIV carriers in the workplace is part of the ‘Getting to Zero’ theme for World AIDS Days from 2011 to 2015. The Day was launched in 1988, and was the first ever global health day.

WHO has stated that the campaign’s goals may seem difficult but are still reachable. While 2.5 million people were newly infected with HIV and an estimated 1.7 million people died last year, that is still 700,000 fewer new infections worldwide than ten years ago, and 600,000 fewer deaths than in 2005.

Much of the progress is attributed to the life-saving medications – called antiretrovirals – to treat those infected with HIV. Currently eight million people in low- and middle-income countries are accessing the treatment they need, up from 400,000 in 2003. These medicines reduce the amount of virus in the blood, which increases the chance they will stay healthy and decreases the risk they can pass the virus to someone else.

“Many countries are facing economic difficulties, yet most are managing to continue expansion of access to antiretroviral medicines,” said the Director of WHO’s HIV Department, Gottfried Hirnschall. “The challenge now is to ensure that global progress is mirrored at all levels and in all places so that people, whoever they are and wherever they live, can obtain antiretroviral therapy when they need it.”

WHO is currently reviewing new scientific research and country experiences in order to publish updated guidance on the use of antiretrovirals next year. 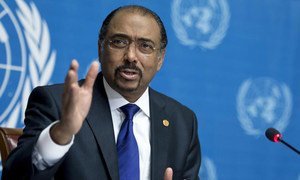 In a move jointly sponsored by the United Nations agency dealing with the global HIV/AIDS response, more than 40 top business leaders today called for the repeal of laws and policies restricting freedom of movement of people living with HIV.