28 November 2012
Temperatures this year are the ninth highest on record since 1850 despite the effect of La Niña, a meteorological phenomenon which is supposed to have a cooling influence on the Earth’s atmosphere, says a new United Nations report released today.

Temperatures this year are the ninth highest on record since 1850 despite the effect of La Niña, a meteorological phenomenon which is supposed to have a cooling influence on the Earth’s atmosphere, says a new United Nations report released today.

High temperatures were accompanied by unprecedented melting of the Arctic sea ice and multiple weather and climate extremes which affected many parts of the world.

The findings are among the highlights of the provisional UN World Meteorological Organization (WMO) statement on the state of the global climate, which provides an annual snapshot of weather and climate events around the world.

The report, which is based on three global temperature sets, was released today at the UN Climate Change Conference in Doha, Qatar, where thousands of representatives from governments, international organizations and civil society are meeting to advance ways to cut global carbon emissions and pollution.

“Naturally occurring climate variability due to phenomena such as El Niño and La Niña impact on temperatures and precipitation on a seasonal to annual scale, but they do not alter the underlying long-term trend of rising temperatures due to climate change as a result of human activities,” said WMO Secretary-General Michel Jarraud.

“The extent of Arctic sea ice reached a new record low. The alarming rate of its melt this year highlighted the far-reaching changes taking place on Earth’s oceans and biosphere. Climate change is taking place before our eyes and will continue to do so as a result of the concentrations of greenhouse gases in the atmosphere, which have risen constantly and again reached new records,” he added.

The Atlantic basin also experienced an above-average hurricane season for a third consecutive year with a total of 19 storms, with 10 reaching hurricane status, the most notable being Sandy, which wreaked havoc across the Caribbean and the US east coast.

East Asia was severely impacted by powerful typhoons, the biggest one being Sanba, which impacted the Philippines, Japan, and the Korean Peninsula, affecting thousands of people and causing millions of dollars in damage.

In March, WMO will publish final updates and figures for 2012 in its annual statement on the status of the global climate. 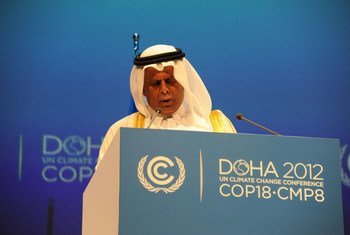 26 November 2012
Thousands of government representatives, international organizations and civil society members have gathered in the Qatari capital of Doha for the United Nations Climate Change Conference, which kicked off today with a call to build on and implement previously agreed decisions to curb global carbon emissions by the year 2020.