Thawing of permafrost to be ‘major factor’ in global warming, warns UN report

Michael Fritz
A scientist (bottom right) standing in front of an ice-rich permafrost exposure on the coast of Herschel Island in Yukon Territory, Canada.
27 November 2012

Massive stores of carbon trapped under the northern hemisphere’s frozen expanses risk being unleashed and significantly contributing to global warming should thawing of the region’s permafrost continue to accelerate, a United Nations report warned today.

Released on the sidelines of the UN Climate Change Conference in the Qatari capital of Doha, the UN Environment Programme (UNEP) report – Policy Implications of Warming Permafrost – underlines the potential hazards facing global ecosystems as well as national infrastructures if the rigid permafrost terrain were to become unstable.

It also warns that the threat posed by carbon dioxide and methane emissions from warming permafrost has only begun to enter mainstream scientific discourse in recent years and, as a result, has not been included in climate prediction modelling.

In a news release marking the report’s launch, Achim Steiner, the Executive Director of UNEP, emphasized the role permafrost could play in rapidly increasing the effects of global warming.

“Permafrost is one of the keys to the planet’s future because it contains large stores of frozen organic matter that, if thawed and released into the atmosphere, would amplify current global warming and propel us to a warmer world,” Mr. Steiner noted.

“Its potential impact on the climate, ecosystems and infrastructure has been neglected for too long,” he continued, adding that the report sought “to communicate to climate-treaty negotiators, policy-makers and the general public the implications of continuing to ignore the challenges of warming permafrost.”

Most of the planet’s permafrost formed during the last ice age and extends up to 700 metres in parts of Russia and Canada. It constitutes an active layer of up to two metres in thickness sitting atop a stratum of frozen soil.

Although permafrost regularly thaws each summer and refreezes in the winter, an increase in thickness of the active layer due to global warming would cause huge quantities of organic matter trapped in the frozen soil to thaw and decay, releasing massive amounts of carbon dioxide.

The report’s finding that permafrost emissions could ultimately account for up to 39 per cent of total global emissions have prompted UNEP and the report’s authors to urge action at the Doha climate conference.

“The release of carbon dioxide and methane from warming permafrost is irreversible: once the organic matter thaws and decays away, there is no way to put it back into the permafrost,” the report’s lead author, Kevin Schaefer, noted.

With most climate change-related legislation ignoring the threat posed by the permafrost thawing, the report recommends a special assessment by the Intergovernmental Panel on Climate Change (IPCC) as well as the creation of national monitoring networks and adaptation plans as key steps to dealing with the potential impacts of what could be “a significant source of emissions” and “a major factor in global warming.”

UNEP also warns that changes in the permafrost could have a substantial impact on human activities as the thawing would cause the terrain to become structurally weak and unsteady, ultimately adding to the growing costs associated with public infrastructure owing to climate change.

“Individual nations need to develop plans to evaluate the risks, costs and mitigation strategies to protect human infrastructure in permafrost regions most vulnerable to thaw,” he concluded. 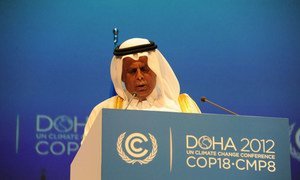 Thousands of government representatives, international organizations and civil society members have gathered in the Qatari capital of Doha for the United Nations Climate Change Conference, which kicked off today with a call to build on and implement previously agreed decisions to curb global carbon emissions by the year 2020.