“If adopted, this reform would seriously undermine previous efforts undertaken by the Colombian Government to ensure that human rights violations, allegedly committed by members of the Colombian military and police forces, are duly investigated, and perpetrators held to account,” said Cécile Pouilly, a spokesperson for the Office of the High Commissioner for Human Rights (OHCHR).

“While noting that the proposed reform excludes crimes against humanity and most gross human rights violations from the military criminal jurisdiction, it is of serious concern that the proposed text establishes that many other human rights violations committed by the military will be tried in military courts, including war crimes and arbitrary detention,” Ms. Pouilly told reporters in Geneva.

OHCHR noted the bill comes at a time when the Government is in the middle of peace negotiations with the Revolutionary Armed Forces of Colombia, known by the Spanish acronym FARC, which is the oldest and largest among the country’s rebel groups.

“We wish to stress that transitional justice mechanisms are available for Colombia to address the serious human rights and humanitarian law violations that occurred and continue (to occur) during the internal armed conflict,” Ms. Pouilly said.

Highlighting that only justice could bring “true peace and reconciliation,” she urged the country’s President, Juan Manuel Santos Calderón, and the President of Congress, Roy Barreras, to reconsider their support for the reform measures.

The experts, part of a cadre of independent experts and special rapporteurs appointed by the 47-nation UN Human Rights Council in Geneva, expressed their concern in an open letter to the Government and Congress of Colombia.

“We believe that there is a real risk that Colombia’s obligations under international humanitarian and human rights law could be infringed if this reform is adopted, and would imply a significant retrogression in the efforts carried out by the Colombian State to overcome and prevent repetition of the notorious human rights violations committed in the past, particularly between 2003 and 2008, by members of the Fuerza Pública (military or police forces),” the experts wrote.

The experts also questioned the need for such a reform as they noted that Colombia had, since 2009, achieved a “notable reduction” in the reported occurrence of the types of violations they recalled had been formerly committed.

OHCHR added that there is a “risk of impunity” for members of the military arising from the fact that the reform would make a military body responsible for the determination of war crimes and arbitrary detention allegedly committed by the military.

“It is also worth stressing that, in the proposed bill, the preliminary investigation phase will be led by military or police criminal justice institutions, to the detriment of an independent evaluation carried out by the competent judicial authorities,” said Ms. Pouilly. “This phase is essential for the clarification of facts and responsibilities.” 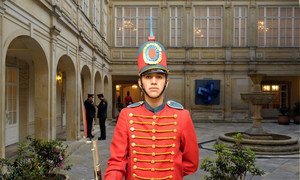 A group of United Nations independent human rights experts today called on Colombian authorities to revisit the military criminal law provisions of proposed constitutional reforms, warning they could have serious implications for the rule of law, violate international law, and reverse the Latin American nation’s achievements in advancing respect for human rights.