26 November 2012
United Nations Secretary-General Ban Ki-moon today highlighted the need for religious and political leaders to use their influence responsibly, while pointing out how recent events in places such as the Middle East and Mali drive home the need to “promote long-term mutual understanding.”

The world body’s chief was speaking at the inauguration ceremony for the King Abdullah Bin Abdulaziz International Centre for Interreligious and Intercultural Dialogue, in the Austrian capital of Vienna.

In his remarks, Mr. Ban mentioned his recent visit to the Middle East, in relation to the outbreak of violence between Israel and Palestinians in Gaza, as well as the situation in Mali.

More than 130 people were killed and over 900 people injured in the recent wave of violence between Israel and Gaza, which came to a halt with a ceasefire last Wednesday. In the case of Mali, the African nation has been dealing with a range of security, political and humanitarian problems since the start of the year, including the imposition of an extremist version of Muslim Sharia law in the north, where radical Islamists have seized control.

“These are just some of the reminders of how important it is to promote long-term mutual understanding that transcends religious, national, cultural and ethnic boundaries and identities,” Mr Ban said.

“That is why I believe so deeply in this Centre’s vision to advance respect for human dignity and human rights, foster mutual respect and generate cooperation for justice, reconciliation and peace,” he added.

The UN chief noted that these values are “central” to all societies, with religious leaders wielding “immense” influence.

“They can be powerful forces for cooperation and learning. They can set an example of interfaith dialogue. They can unite people based on tenets and precepts common to all creeds,” he said. “But we must also recognize that throughout history and in the present day, too many religious leaders have stoked intolerance, supported extremism and propagated hate – instead of leading along the path of tolerance and peace, they have bred division.”

Political leaders, Mr. Ban continued, also have a responsibility to use their influence for the greater good.

“In the face of economic and social pressures, we have seen far too many hate-based political appeals that target minorities,” he said. “Yet we know that blaming ‘the other’ is not a political strategy for a healthy country, continent or world. We must all do better in reaching out across boundaries.”

The Secretary-General encouraged the Centre to cooperate closely with the UN Alliance of Civilizations, which will meet in Vienna in February next year. Launched in 2005 through the initiative of Spain and Turkey, under the auspices of the United Nations, the Alliance seeks to promote better cross-cultural relations worldwide.

While in the Austrian capital, Secretary-General Ban had a range of meetings, both with UN staff and others, such as the President of Austria, Heinz Fischer, and the Foreign Minister, Michael Spindelegger.

In his meeting with the President, Mr, Ban discussed the Middle East peace process, the recently agreed ceasefire between Israel and Gaza and developments in south-eastern Europe. Mr. Ban also discussed these topics with the Foreign Minister, in addition to developments in the Sahel, Mali, the Democratic Republic of the Congo, Syria and Egypt and nuclear disarmament and non-proliferation and sustainable energy.

In both meetings, the Secretary-General thanked Austria for its contribution of troops to the UN Disengagement Observer Force (UNDOF) on the Golan and for its continued commitment to the peacekeeping mission despite the difficult circumstances there.

Mr. Ban is scheduled to return to New York on Tuesday afternoon. 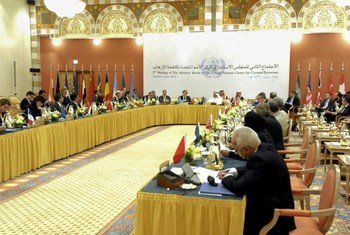