At the end of a visit to Japan related to health issues stemming from the Fukushima Daiichi nuclear accident, a United Nations independent expert today stressed the importance of monitoring the effects of atomic radiation on people’s health.

While the UN Special Rapporteur on the right to health, Anand Grover, commended the Government of Japan for undertaking a health management survey in Fukushima, he also urged it to expand the survey to all radiation-affected zones and carry out more comprehensive studies that would examine and monitor internal radiation exposure of people in the long-term.

In addition, according to a news release from the Office of the UN High Commissioner for Human Rights (OHCHR), Mr. Grover warned about concerns that affected residents “have had no say in decisions that affect them,” and stressed that the right to health framework requires that “the affected people in Japan need to be part of the decision-making process as well as of the implementation, monitoring and accountability procedures.”

The Special Rapporteur’s comments come at the end of his first mission to Japan – from 15-26 November and at the Government’s request – to assess the links between the right to health of the affected people and the actions taken in the aftermath of Japan’s worst man-made nuclear accident.

Mr. Grover highlighted that the participation of the affected communities can produce benefits such as building confidence in the Government, facilitating the implementation of those decisions, and improving monitoring and accountability.

He pointed out that the forthcoming implementation of a parliamentary act on the protection and support for victims of nuclear disaster, adopted in June 2012, was a perfect opportunity for the Government to formulate “the basic policy and subordinate regulations with the full participation of the affected communities, including vulnerable groups.”

During his eleven-day visit to the country, the independent expert travelled beyond Tokyo to the Fukushima and Miyagi prefectures to meet with different stakeholders, including Government officials, medical practitioners, legal experts, civil society, community representatives and affected residents.

Independent experts, or special rapporteurs like Mr. Grover, are appointed in an honorary capacity by the Geneva-based UN Human Rights Council to examine and report back on a country situation or a specific human rights theme. He is scheduled to present his full report on his visit to Japan to the Council in June 2013. 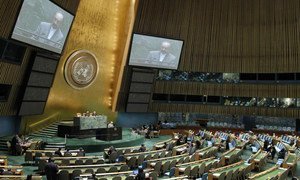 A year after reporting on the devastation caused by the Fukushima Daiichi nuclear accident in Japan, the head of the United Nations International Atomic Energy Agency (IAEA) told the world body’s Member States today that nuclear power is safer than before the disaster.