UNHCR/S. Modola
Displaced people in eastern Democratic Republic of the Congo are often subject to indiscriminate attacks as fighting continues between government and rebel troops.

In a statement issued by his spokesperson, Mr. Ban also welcomed the outcome of the International Conference on the Great Lakes Region Summit, held yesterday in the Ugandan capital of Kampala and attended by several African heads of State, which urges the rebel group to stop the violence and threats to depose the DRC Government.

“The Secretary-General calls on the M23 to immediately lay down their arms in accordance with the agreements reached in Kampala, and comply with the immediate withdrawal of their forces from Goma,” said the statement.

“The Secretary-General encourages the parties to build on the dialogue among the leaders of the Great Lakes region to address the fundamental causes of conflict.”

M23 fighters – a rebel group composed of soldiers who mutinied from the DRC national army in April – occupied Goma, the capital of North Kivu, on Tuesday after launching a new wave of attacks last weekend. Fighting has continued and the rebels are now said to have reached the town of Sake, which is 20 kilometres west of Goma.

The advance of the M23 has uprooted some 60,0000 civilians and fuelled numerous allegations of human rights abuses by both the rebels and the national army, known by the French acronym FARDC.

The violence also prompted the UN Organization Stabilization Mission in the DRC (MONUSCO) to deploy attack helicopters in support of the FARDC.

Mr. Ban reiterated his commitment to support the efforts of African leaders, and his determination to ensure that the UN presence in the DRC is adjusted “to respond to the evolving challenges.”

MONUSCO currently has some 1,500 'blue helmets' in Goma, and another 6,700 and 4,000 in the provinces of North and South Kivu, respectively, including, in some places, behind the M23 lines. In Goma, the 'blue helmets' control the city's airport and are conducting regular patrols, in line with their mandate to provide protection for civilians. 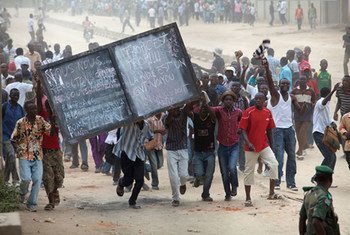 23 November 2012
United Nations humanitarian agencies today voiced their growing concern for civilians affected by the recent fighting in eastern Democratic Republic of the Congo (DRC), where the situation remains “alarming” as rebel fighters continue their advance across North Kivu province.