22 November 2012
The United Nations human rights chief today expressed serious concern about the sudden execution of 14 prisoners in Afghanistan over the past few days after more than a year without carrying out the death penalty.

“Under international law and Afghanistan's own treaty obligations, the death penalty must be reserved for the most serious crimes and only applied after the most rigorous judicial process,” said the UN High Commissioner for Human Rights, Navi Pillay. “In the past, shortcomings in the Afghan judicial procedure have raised serious questions about such cases.”

The executions were reportedly approved by President Hâmid Karzai following a review of 250 cases of prisoners sentenced to death by a presidential committee. The 14 prisoners executed at Pul-e-Charkhi prison on the outskirts of Kabul on 20 and 21 November had been convicted of serious crimes, including murder, rape and national security crimes. The last such executions in Afghanistan were carried out in June 2011.

Afghanistan's justice system relies primarily on confessions, including some obtained through the use of torture, which raises serious concerns about the trials of those who were sentenced to death, the Office of the UN High Commissioner for Human Rights (OHCHR) said in a news release. In addition, the UN has repeatedly flagged the country's failure to meet international fair trial standards and due process guarantees under Afghan law.

“Afghans have already suffered the brutalizing effects of decades of war and the right to life – the most fundamental of all human rights – is in desperate need of reinforcement in a country plagued by killing and violence,” Ms. Pillay said.

The resumption of executions in Afghanistan comes in sharp contrast to the general trend worldwide towards ending the use of capital punishment. Just two days ago, a record 110 countries voted in favour of the latest General Assembly resolution calling for the abolition of the death penalty.

“More and more countries are recognizing that the death penalty does harm to society. I urge President Karzai to show that the rule of law can also be built on clemency and humanity, and that Afghanistan too will join the worldwide trend against the death penalty.”

Ms. Pillay also added her disappointment at the execution in India of Mohammad Ajmal Amir Qasab who was convicted for his role in the terrorist attack on Mumbai in 2008. This was the first execution carried out in India since 2004.

“There can be no question of the gravity of the crimes committed in Mumbai, but in equally serious crimes, international tribunals have imposed sentences of life imprisonment,” she said. “The supreme court of India has sanctioned the death penalty in only the 'rarest of the rare' cases, but I hope that India too will move towards total abolition.” 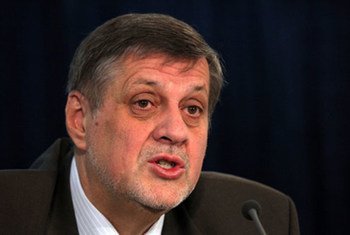 26 October 2012
The United Nations top political envoy for Afghanistan today condemned a suicide bomb attack which killed at least 40 people in the country's north, during prayers linked to one of the holiest holidays of the Muslim faith