DR Congo: amid violence, UN officials voice concern over delivery of aid and impact on children

IRIN Siegfried Modola
IDPs who fled clashes in Kabindi, eastern DRC, between government forces and the M23 rebel group in May 2012.
21 November 2012

Two senior United Nations officials have voiced their shock and concern over the violence accompanying the march on and occupation of the city of Goma in the eastern the Democratic Republic of the Congo (DRC) by the 23 March Movement (M23) rebel group.

“I have been shocked by the pictures I have seen of the ordinary women, men and children fleeing the violence in and around Goma,” the UN Under-Secretary-General for Humanitarian Affairs and Emergency Relief Coordinator, Valerie Amos, said in a news release.

“Insecurity is preventing the delivery of the most basic humanitarian assistance that people need and many of the communities hosting them are already overstretched,” she added.

Fighters with the M23 – composed of soldiers who mutinied from the DRC national army in April – occupied Goma, yesterday, following a steady advance over recent days.

On Tuesday night, the Security Council unanimously adopted a resolution in which it strongly condemned the latest wave of attacks by the M23 and demanded its immediate withdrawal from Goma, the capital of North Kivu province – which is four times the size of Belgium.

The advance of the M23 has uprooted some 60,0000 civilians and had prompted the UN Organization Stabilization Mission in the DRC (MONUSCO) to deploy attack helicopters in support of the national army, known by the French acronym FARDC.

MONUSCO has some 1,500 ‘blue helmets’ in Goma, and another 6,700 and 4,000 in the provinces of North and South Kivu, respectively, including, in some places, behind the M23 lines. In Goma, the ‘blue helmets’ control the city’s airport and are conducting regular patrols, in line with their mandate to provide protection for civilians.

“The fighting needs to stop immediately and I urge all parties to uphold their obligations under international human rights and humanitarian law,” Ms. Amos said. “This includes prohibiting attacks against civilians and ensuring safe and unhindered humanitarian access to people in need.”

She noted that despite the “very challenging” environment, humanitarian workers are committed to supporting those affected in the Kivu provinces and neighbouring areas.

Ms. Amos also echoed comments made by the world body’s peacekeeping chief, Hervé Ladsous, in calling for a political solution to the situation in the eastern DRC, which has long been the focus of violence involving armed groups.

“A further escalation of violence will have grave consequences for the people of eastern DRC and the Great Lakes region,” she added.

Separately today, the Secretary-General’s Special Representative for Children and Armed Conflict, Leila Zerrougui, expressed her deep concern about the situation of children in the ongoing conflict, noting that the advance of the M23 into Goma and the town of Sake has been accompanied by serious violations committed against children.

“Children have been killed and injured in the cross-fire, deliberately targeted and allegedly recruited as soldiers. I call on all parties to immediately halt the violence and spare children from the impact of conflict,” Ms .Zerrougui said.

Over the past four days, 16 children were injured by bullets and explosive devices during clashes between the M23 and the DRC armed forces and security services, according to a news release from the UN envoy’s office. Yesterday, a boy was reportedly shot dead by M23 fighters in Goma because of his alleged association with Government forces.

“Children, especially those formerly associated with armed groups, are living in constant fear of recruitment or re-recruitment,” Ms. Zerrougui added. Her office noted that since the creation of the M23, the UN has documented 44 children recruited into the armed group’s ranks as combatants and as porters, escorts and for sexual purposes.

“The international community cannot tolerate another wave of violence against children without impunity,” the Special Representative noted. “External support to the M23 rebels has to stop, and those responsible must be held accountable in national and international courts.” 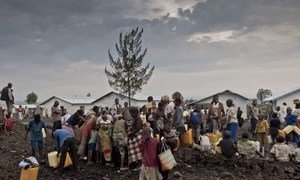 Amidst growing concerns over the delivery of humanitarian assistance to the area, a United Nations senior official today expressed concern over reported human rights violations against civilians in the eastern Democratic Republic of the Congo (DRC), as clashes between the national army and fighters with the rebel 23 March Movement (M23) continue.