UN Photo/Paulo Filgueiras
A view of the Security Council as Secretary-General Ban Ki-moon (on screens) briefs the Council via videolink from Tel Aviv, Israel.

“I commend the parties for stepping back from the brink,” Mr. Ban said, as he briefed the Security Council via video-link from Tel Aviv. “Our focus now must be on ensuring the ceasefire holds and that all those in need in Gaza – and there are many – receive the humanitarian assistance that they need.”

The Security Council in turn issued its own statement to the press unanimously welcoming the agreement. It called on the parties to both uphold the agreement and to “act seriously to implement its provisions in good faith.”

The Council also expressed its “continued support for the ongoing international efforts to consolidate this agreement.”

Mr. Ban noted that the agreement marked a “huge relief” for the people of Gaza and Israel and for the international community that the violence is stopping.

“But we are all aware of the risk,” he added. “And we are all aware that there are many details that must be solidified for a broad, durable ceasefire to take firm hold over the longer term. It is imperative that both sides stick to the ceasefire in order to allow these underlying issues to be addressed in a sustainable fashion.”

The ceasefire between Israel and the Palestinian group Hamas, which controls Gaza, was announced today in the Egyptian capital, Cairo, just over a week after the latest wave of violence – which includes rocket attacks against Israel from Gaza, and Israeli airstrikes on Gaza – began.

The violence claimed the lives of 139 Palestinians, more than 70 of them civilians, and wounded more than 900, according to the UN team in Gaza. It also displaced 10,000 people in the territory, which is home to 1.7 million Palestinians.

Since 14 November, rocket fire has resulted in the death of four Israeli civilians, while 219 are reported injured, most of whom are civilians, said Mr. Ban. One Israeli soldier was killed yesterday, while 16 others have been wounded, one critically.

“My paramount concern throughout has been for the safety and well-being of all civilians, no matter where they are,” said the Secretary-General. “Innocent people, including children, have been killed and injured on both sides. Families on both sides were forced to hover in fear as the violence raged around them.”

The Council statement said members “strongly commend the efforts of Egyptian President Morsi and others to achieve the ceasefire.” It added they also expressed “strong appreciation” for the efforts in this regard of Mr. Ban.

In his comments to the Council, Mr. Ban said that the current crisis underscored that the status quo was unsustainable, and that long-term solutions must be found to the problems of Gaza, and for the Palestinians as a whole.

“A negotiated two-State solution ending a prolonged occupation and ending the conflict between Israel and the Palestinians is more urgent than ever,” he said. “Achieving this vision, which has been affirmed by this Council repeatedly is long overdue and paramount to the stability of the region. Only a just and comprehensive peace can bring lasting security to all.”

In its statement, the Council “affirmed the need for the people of Israel and the Palestinian people in the Gaza Strip to live without fear.”

According to the Council, the international community would “work in this regard with Israel, the Palestinian Authority, and Egypt for the expeditious and unimpeded delivery of such humanitarian assistance, including of food, fuel and medical treatment.”

Saying they “deplored” the loss of civilian lives that have occurred, Council members reiterated the need to “take appropriate steps to ensure the safety and well-being of civilians and their protection in accordance with international humanitarian law,” their statement said.

The members of the Council also stressed the “urgency of the restoration of calm in full, and reiterated the importance of achieving a comprehensive peace based on the vision of a region where two democratic States, Israel and Palestine, live side by side in peace with secure and recognized borders.”

Mr. Ban cancelled a previously-scheduled trip to travel to the Middle East “as a clear signal of the need for international diplomatic mobilization to prevent a further escalation that would put the whole region at risk and to strengthen the commendable efforts led by Egypt to reach a ceasefire.” 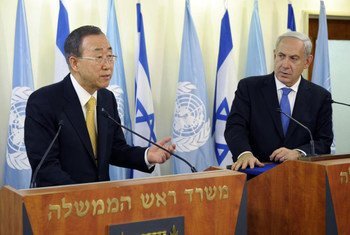 20 November 2012
United Nations Secretary-General Ban Ki-moon today called on Israel to exercise “maximum restraint” in its operation focused on Gaza, saying in Jerusalem that the loss of civilian lives was “unacceptable under any circumstances.”