United Nations Secretary-General Ban Ki-moon condemns in the “strongest possible terms” a bomb attack on a bus today in the centre of the Israeli city of Tel Aviv, according to his spokesperson.

“The Secretary-General was shocked at the news of the terror attack,” the spokesperson added in a statement. “There are no circumstances that justify the targeting of civilians. The Secretary-General is saddened and expresses his sympathy to those injured in the blast.”

According to media reports, at least 10 people have been injured in the bus explosion, which comes amidst a wave of renewed violence between Israel and Gaza – including rocket attacks against Israel from Gaza, and Israeli airstrikes on Gaza – that began on 14 November.

A chorus of UN officials, beginning with the Secretary-General, have appealed for an end to the violence and strongly urged the parties to achieve an immediate ceasefire.

The attack took place as the UN chief visits the region in order to help bring about an end to the ongoing violence. He has strongly urged the parties to avoid further escalation and work towards achieving an immediate ceasefire.

The UN chief is scheduled to travel to Ramallah in the West Bank to meet with Palestinian President Mahmoud Abbas. Previously, he has met with various leaders in the region, including Israeli Prime Minister Benjamin Netanyahu, Egyptian Prime Minister Hisham Mohamed Qandil and the Secretary-General of the League of Arab States, Nabil Elaraby. 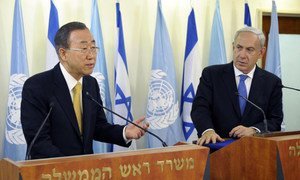 United Nations Secretary-General Ban Ki-moon today called on Israel to exercise “maximum restraint” in its operation focused on Gaza, saying in Jerusalem that the loss of civilian lives was “unacceptable under any circumstances.”