Nobel peace prize winner Aung San Suu Kyi has accepted a new role with the Joint United Nations Programme on HIV/AIDS (UNAIDS) to advance efforts to eliminate stigma and discrimination against those affected by the epidemic.

“It is a great honour to be chosen as a champion for people who live on the fringes of society and struggle every day to maintain their dignity and basic human rights. I would like to be the voice of the voiceless,” said Ms. Suu Kyi, a Member of Parliament in her native Myanmar.

She accepted the invitation to serve as Global Advocate for Zero Discrimination during a recent meeting with UNAIDS’ Executive Director, Michel Sidibé, at her residence in Myanmar’s capital, Nay Pyi Taw.

Ms. Suu Kyi spent nearly two decades under house arrest, before her release in November 2010. In April of this year, she was elected to the lower house of parliament during by-elections that were part of a series of democratic reforms begun last year by President Thein Sein.

A strong supporter of the AIDS movement, Ms. Suu Kyi has publically engaged with people living with HIV as part of her efforts to counter stigma and discrimination, according to a news release from UNAIDS announcing her appointment.

“From small villages to big cities, from Africa to Asia, people are talking about Daw Aung San Suu Kyi,” said Mr. Sidibé. “She is inspirational. We are honoured to have her as our UNAIDS Global Advocate for Zero Discrimination. I hope her example will inspire community leaders everywhere to speak out against stigma and discrimination.”

The newly-appointed advocate is concerned that stigma and discrimination create an environment of fear that prevents people from accessing life-saving HIV services.

“In Myanmar,” she said, “we are currently treating more than 40,000 people living with HIV. It is important that everyone who suspects they may be at risk seeks an HIV test and knows their HIV status early, so they can prevent new infections and can access life-saving treatment when needed.”

It will become a reality, according to Mr. Sidibé, if the world can revolutionize HIV prevention and mobilize young people as agents of change; scale up universal access to treatment and services; break the trajectory of treatment costs; promote innovation, technology transfer and country ownership; stop violence against women and girls; and open a frank discussion about intergenerational sex and concurrent partnership.

It will also require that the vulnerable populations most affected by the epidemic – migrants, people who inject drugs, sex workers, and men who have sex with men – do not face discrimination and have access to life-saving services. 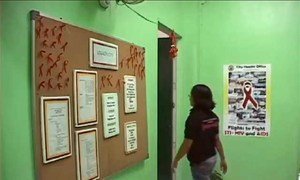 British business entrepreneur Sir Richard Branson today threw his support behind a United Nations-backed drive to rid the world finally of the remaining discriminatory laws that keep people from visiting, or living and working in countries solely because they are HIV positive.