Welcoming the latest human rights commitments from the Government of Myanmar, an independent United Nations expert today called on authorities there to work with all stakeholders to ensure that they are promptly carried out.

The pledges announced by the Government on 18 November include the resumption of prison visits for the International Committee of the Red Cross, the setting up of a mechanism to review prisoner lists, addressing the situation in Rakhine state, and an invitation to the UN High Commissioner for Human Rights to establish a country office.

“I now encourage the Government to work with all stakeholders, including the international community, in working out the necessary details and ensuring that they are properly implemented,” he added.

“Full access to places of detention by international and national monitoring groups will help to address ongoing concerns about the condition and treatment of prisoners and detainees, including in Rakhine state, where many hundreds of people have been detained since June this year,” he pointed out.

Mr. Ojea Quintana said the setting up of the review mechanism on ‘prisoner cases of concern’ by the end of December 2012 must involve relevant stakeholders, including political and civil society organisations and released prisoners themselves.

“The outcome of this mechanism should be that no prisoners of conscience are left behind bars,” he said, adding that achieving this will require meaningful consultation with a wide range of people from both inside and outside of Government circles.”

He welcomed the presidential order of 16 November that led to the release of around 50 prisoners of conscience, while again calling on the Government to ensure that these releases are without conditions. He also called for steps to be taken to ensure prisoners’ reintegration into society, including access to medical services and education and employment opportunities.

On Rakhine state, the location of recent inter-communal violence, Mr. Ojea Quintana welcomed the commitment by the Government to strengthen the rule of law, to work with the international community to meet humanitarian needs, and to address ‘contentious’ issues such as citizenship.

He also highlighted the need for the Government to develop a clear strategy to address the tensions that exist between groups on the grounds of ethnicity and religion, which will include addressing the discrimination and human rights violations committed against the Rohingya community.

Located in western Myanmar, Rakhine state has witnessed waves of violence since earlier this year between ethnic Rakhine Buddhists and Rohingya Muslims, leaving dozens of civilians dead and tens of thousands internally displaced.

Independent experts, or special rapporteurs like Mr. Ojea Quintana, are appointed in an honorary capacity by the Geneva-based UN Human Rights Council to examine and report back on a country situation or a specific human rights theme. 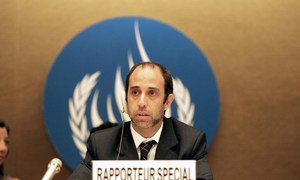 UN expert welcomes release of prisoners of conscience in Myanmar

A United Nations independent expert today welcomed the latest presidential amnesty releasing a number of prisoners of conscience in Myanmar, and called on authorities to continue this systematic liberation without conditions, stressing that this is key for the country's democratic transition and reconciliation process.