“The pace of progress is quickening – what used to take a decade is now being achieved in 24 months,” the Executive Director of Joint United Nations Programme on HIV/AIDS (UNAIDS), Michel Sidibé, said in relation to the report, Results.

“We are scaling up faster and smarter than ever before. It is the proof that with political will and follow-through we can reach our shared goals by 2015,” he added in a news release from UNAIDS, the lead UN agency dealing with the global AIDS response.

According to Results, in some of the countries which have the highest HIV prevalence in the world, rates of new HIV infections have been cut dramatically since 2001 – by 73 per cent in Malawi, 71 per cent in Botswana, 68 per cent in Namibia, 58 per cent in Zambia, 50 per cent in Zimbabwe and 41 per cent in South Africa and Swaziland.

In addition, sub-Saharan Africa has reduced AIDS-related deaths by one third in the last six years and increased the number of people on antiretroviral treatment by 59 per cent in the last two years alone.

In particular, Mr. Sidibé cited South Africa as an example of the benefits of a scaled-up response. It increased its scale-up of HIV treatment by 75 per cent over the last two years – ensuring 1.7 million people had access to life-saving treatment – and new HIV infections have fallen by more than 50,000 in just two years. During this period, South Africa also increased its domestic investments on AIDS to $1.6 billion, the highest by any low- and middle-income country.

The report also shows that countries are assuming shared responsibility by increasing domestic investments in the response to the disease. More than 81 countries increased such investments by 50 per cent between 2001 and 2011.

The report comes days before World AIDS Day, which falls on 1 December, and as the international community steps up efforts to achieve one of the anti-poverty targets known as the Millennium Development Goals (MDGs), which have a 2015 deadline for achieving them.

The MDGs were agreed on by world leaders at a UN summit in 2000 and set specific targets on a range of issues including poverty alleviation and education, as well as HIV/AIDS. The aims of the specific MDG that deals with the disease is to halt and begin to reverse, by 2015, its spread.

In the last two years, new HIV infections in children decreased by 24 per cent. In six countries –Burundi, Kenya, Namibia, South Africa, Togo and Zambia – the number of children newly infected with HIV fell by at least 40 per cent between 2009 and 2011.

“It is becoming evident that achieving zero new HIV infections in children is possible,” said Mr Sidibé. “I am excited that far fewer babies are being born with HIV. We are moving from despair to hope.”

Antiretroviral therapy has emerged as a powerful force for saving lives, the report notes. In the last 24 months, the number of people accessing treatment has increased by 63 per cent globally. In sub-Saharan Africa, a record 2.3 million people had access to treatment, while China has increased the number of people on HIV treatment by nearly 50 per cent in the last year alone.

In the area of investments in the global AIDS response, the report shows that countries are increasing their investments despite a difficult economic climate. The global gap in resources needed annually by 2015 now stands at 30 per cent. In 2011, $16.8 billion was available and the need for 2015 is between $22-24 billion.

In 2011, for the first time ever, domestic investments from low- and middle-income countries surpassed global giving for HIV. However, international assistance, which has been stable in the past few years, remains a critical lifeline for many countries, according to the report. In 26 of 33 countries in sub-Saharan Africa, donor support accounts for more than half of HIV investments.

Results notes that an estimated 6.8 million people are eligible for treatment and do not have access. UNAIDS also estimates that an additional four million discordant couples – where one partner is living with HIV – would benefit from HIV treatment to protect their partners from HIV infection.

Of the 34 million people living with HIV, about half do not know their HIV status. The report states that if more people knew their status, they could come forward for HIV services.

In addition, there is an urgent need to improve HIV treatment retention rates; reduce the cost of second- and third-line treatment; and explore new ways of expanding and sustaining access to treatment, including domestic production of medicines and innovative financing.

“UNAIDS will focus on supporting countries to accelerate access to HIV testing and treatment. Now that we know that rapid and massive scale up is possible, we need to do more to reach key populations with crucial HIV services,” said Mr. Sidibé. 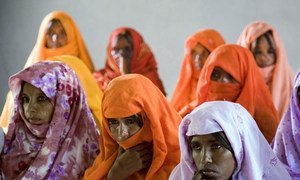 In a bid to ensure the global fight against three of the world’s most devastating diseases remains efficient, the Board of the United Nations-backed Global Fund to Fight AIDS, Tuberculosis and Malaria voted today to begin an immediate transition to a new investing formula.