Amidst growing concerns over the delivery of humanitarian assistance to the area, a United Nations senior official today expressed concern over reported human rights violations against civilians in the eastern Democratic Republic of the Congo (DRC), as clashes between the national army and fighters with the rebel 23 March Movement (M23) continue.

“The advances made by the M23 rebel group over the past few days have been accompanied by a significant number of violations of human rights and international humanitarian law committed against civilians, particularly those fleeing the combat zones,” he added.

The M23 – composed of soldiers who mutinied from the DRC national army in April – launched new attacks over the weekend in North Kivu province, uprooting some 60,0000 civilians and prompting the peacekeeping force known as the UN Organization Stabilization Mission in the DRC (MONUSCO) to deploy attack helicopters in aid of the national army, known by the French acronym FARDC. The rebels are reported to be advancing on North Kivu’s provincial capital, Goma.

In his comments to journalists, Mr. Colville said that the rebels have committed several crimes on their advance on Goma, including the wounding and abduction of civilians, looting and destruction of properties, and threatening journalists.

UN human rights teams on the ground have documented cases where civilians have been targeted or killed by M23 fighters for resisting recruitment, opposing looting or for their perceived collaboration with Government forces.

Yesterday, UN teams had to stop their investigative work and seek refuge in one of MONUSCO’s military bases due to shootings by M23 members in densely populated areas near Goma’s airport, close to UN assets and personnel.

Mr. Colville also noted that various M23 senior commanders have a record of serious human rights violations and three of them – Sultani Makenga, Bosco Ntaganda, and Innocent Zimurinda – have been listed by a UN sanctions committee. He added that Ms. Pillay is concerned over reports of looting and the destruction of houses by retreating FARDC troops.

“She is stressing that all human rights violations by all sides, including the FARDC, must be investigated and those found responsible held to account,” Mr. Colville said. “All parties to the conflict must take all possible precautions to protect the civilian population and civilian objects under their control against the effects of attacks.”

During the same news briefing, a spokesperson for the Office of the UN High Commissioner for Refugees (UNHCR), Adrian Edwards, said the escalating violence has prompted the agency to urge DRC’s neighbouring countries to refrain from forcibly returning people from the provinces of North and South Kivu until the security and human rights situations there improve.

“UNHCR considers people fleeing the conflict in the Kivus and nearby affected areas as likely to be needing international refugee protection,” Mr. Edwards said. “UNHCR also cautions against returning them to safer parts of DRC, unless they have strong and close links there.”

According to UNHCR estimates, the number of DRC refugees in neighbouring countries currently stands at 463,000, located mainly in Uganda, the Republic of Congo, Rwanda and Tanzania.

There are also more than 1.6 million internally displaced persons (IDPs) in the Kivus as a result of the fighting – they are part of the 2.4 million IDPs in the country as a whole.

Addressing the same news briefing, a spokesperson for the UN Office for the Coordination of Humanitarian Affairs (OCHA), Jens Laerke, said that the escalating violence has also made it increasingly difficult for relief agencies to deliver assistance.

Mr. Laerke said that tens of thousands of people who are already IDPs in North Kivu have been forced into new displacement over the past five days. In particular, he noted that the Kanyaruchinya IDP camp located north of Goma has been emptied of its population, with its 60,000 inhabitants fleeing insecurity in the area.

Although humanitarian agencies have indentified three sites near the camp where these IDPs will be able to go, assistance has slowed down in Goma, where many agencies are based, he added. In South Kivu, insecurity has also led to the suspension or reduction of humanitarian activities in some areas.

“Since the beginning of the year, aid workers have been targeted in nearly 170 security incidents in the two provinces,” Mr. Laerke told the briefing. “The humanitarian community calls for unhindered access to people in need and urge the Congolese authorities – which have the primary responsibility for the protection of civilians – to engage more effectively in the protection of civilians and humanitarian workers.” 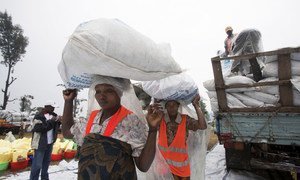 Fresh clashes in eastern Democratic Republic of the Congo (DRC) between fighters with the rebel 23 March Movement (M23) and the national army have forced thousands of displaced men, women and children to flee again, adding to what United Nations agencies say is an already dire humanitarian situation in which over 2.4 million people are internally displaced due to conflict.