Despite significant eradication efforts, high opium prices led to an increase in poppy cultivation in Afghanistan this year, a joint report released today by the Government and the United Nations Office on Drugs and Crime (UNODC) has found.

Cultivation was 18 per cent higher this year than it was last year, covering 154,000 hectares, according to the 2012 Afghanistan Opium Survey. However, since plant diseases and bad weather had damaged crops, potential opium production fell 36 per cent over the same period from 5,800 to 3,700 tons.

The increase in cultivation occurred in spite of a major push by the Government to promote eradication efforts, UNODC noted in a news release. The number of poppy-free provinces remains unchanged at 17, but Ghor province in the west lost that status in 2012 while Faryab province in the north regained it.

The agency noted that, in 2012, farm-gate prices for opium remained at a relatively high level at $196 per kilogramme, which continues to provide a strong incentive for farmers to start or resume poppy cultivation in the coming season.

Mr. Fedotov called for a sustained effort by the Afghan Government and international stakeholders to address illicit cultivation with “a balanced approach of development and law enforcement measures.”

In the east, cultivation rose significantly in the provinces of Kunar, where it was up 121 per cent; Kapisa, where it climbed 60 per cent; and Laghman, where it rose 41 per cent. However, the eastern provinces contributed only four per cent to the national total of opium production in 2012, the Survey pointed out.

♦ Receive daily updates directly in your inbox - Subscribe here to a topic.
♦ Download the UN News app for your iOS or Android devices.
Afghanistan|drugs 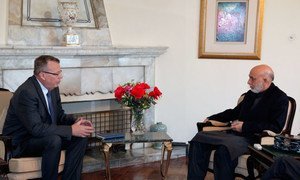 Highlighting the importance of political commitment and action, the head of the United Nations Office on Drugs and Crime (UNODC), Yury Fedotov, today welcomed efforts by the Afghan Government to combat the menace of trafficking and production of narcotics in the country.