The amount of greenhouse gases in the atmosphere reached a new record high in 2011, according to a new United Nations report released today, ahead of the start next week of the latest round of global climate changes talks.

The amount of greenhouse gases in the atmosphere reached a new record high in 2011, according to a new United Nations report released today, ahead of the start next week of the latest round of global climate changes talks.

The UN World Meteorological Organization (WMO), which produced the 2011 Greenhouse Gas Bulletin, said that between 1990 and 2011, there was a 30 per cent increase in radiative forcing – the warming effect on the Earth's climate – because of carbon dioxide (CO2) and other heat-trapping long-lived gases.

Since the start of the industrial era in 1750, about 375 billion tonnes of carbon have been released into the atmosphere as CO2, primarily from fossil fuel combustion, the agency stated in a news release. About half of this carbon dioxide remains in the atmosphere, while the rest is absorbed by the oceans and terrestrial biosphere.

“These billions of tonnes of additional carbon dioxide in our atmosphere will remain there for centuries, causing our planet to warm further and impacting on all aspects of life on Earth,” said WMO's Secretary-General, Michel Jarraud. “Future emissions will only compound the situation.”

Mr. Jarraud noted that, until now, carbon sinks have absorbed nearly half of the carbon dioxide humans emitted in the atmosphere, but this will not necessarily continue in the future.

Carbon sinks are any process, activity or mechanism that removes a greenhouse gas from the atmosphere. Forests, soils and oceans are natural sinks for CO2.

“We have already seen that the oceans are becoming more acidic as a result of the carbon dioxide uptake, with potential repercussions for the underwater food chain and coral reefs,” said Mr. Jarraud.

The role of carbon sinks is “pivotal” in the overall carbon equation, according to WMO. If the extra CO2 emitted is stored in reservoirs such as the deep oceans, it could be trapped for hundreds or even thousands of years, whereas new forests retain carbon for a much shorter time span.

The agency noted that carbon dioxide is the single most important greenhouse gas emitted by human activities, and is responsible for 85 per cent of the increase in radiative forcing over the past decade. It is also the most important long-lived greenhouse gas, with the others being methane and nitrous oxide.

Greenhouse gases will feature prominently on the agenda of the UN Climate Change Conference that begins in the Qatari capital of Doha on Monday, and which brings together the 195 Parties to the UN Framework Convention on Climate Change (UNFCCC), the parent treaty of the 1997 Kyoto Protocol.

The Kyoto Protocol has been ratified by 192 of the UNFCCC Parties. Under the Protocol, 37 States, consisting of highly industrialized countries and countries undergoing the process of transition to a market economy, have legally binding emission limitation and reduction commitments.

The ultimate objective of both treaties is to stabilize greenhouse gas concentrations in the atmosphere at a level that will prevent dangerous human interference with the climate system.

♦ Receive daily updates directly in your inbox - Subscribe here to a topic.
♦ Download the UN News app for your iOS or Android devices.
greenhouse 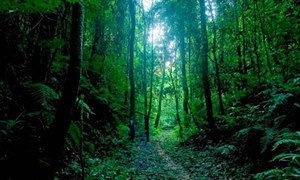 The United Nations Food and Agriculture Organization (FAO) is helping Tanzania determine how much carbon is stored in forests and forest soils, in an effort to reduce greenhouse gas emissions that contribute to global warming.