IRIN/Ahmed Dalloul
An ambulance carrying injured Palestinians preparing to take them from Shifa hospital, Gaza, to Egypt for urgent treatment.

19 November 2012
The civilian death toll in Gaza has continued to rise since the new wave of violence between the territory and Israel intensified last week, the UN agency assisting Palestinian refugees warned today, reiterating its call for all sides to stop the violence.

“The situation [for civilians] is bad,” said the spokesperson for the UN Relief and Works Agency for Palestinian Refugees in the Near East (UNRWA), Christopher Gunness. “This is a very densely populated place. There are many, many civilians. More than half of Gaza’s 1.7 million people are children, and what we are seeing are rockets flying out of this area, populated largely by civilians, and airstrikes coming in.”

“The civilian death toll is rising and it will continue to rise, unless the words of Secretary-General Ban Ki-moon are heeded by the parties on the ground,” Mr. Gunness added.

The recent wave of violence – which includes rocket attacks against Israel from Gaza, and Israeli airstrikes on Gaza – have reportedly resulted in more than 90 Palestinians and three Israelis having been killed, with many others wounded.

UNRWA has 1.2 million beneficiaries in Gaza, where, last week, one of its staff members was killed in an Israeli airstrike.

“We are echoing the call of Secretary-General Ban Ki-moon in appealing to all sides to exercise utmost restraint, to de-escalate so that peace can begin to take hold,” Mr. Gunness said. “All sides must honour their obligations under international humanitarian law to protect civilians.”

Yesterday, Mr. Ban, who is currently in Cairo, Egypt, renewed his appeal for an end to the ongoing violence, and strongly urged the parties to achieve an immediate ceasefire.

During a briefing to reporters this afternoon, Mr. Ban’s spokesperson said Mr. Ban will meet tomorrow with Egyptian President Mohamed Morsi and the Secretary-General of the League of Arab States, Nabil El-Araby, and, later this week, with Israeli Prime Minister Benjamin Netanyahu and the President of the Palestinian Authority, Mahmoud Abbas.

Mr. Gunness said that UNRWA, which distributes food, provides health services, and operates schools, would continue to carry out its work. 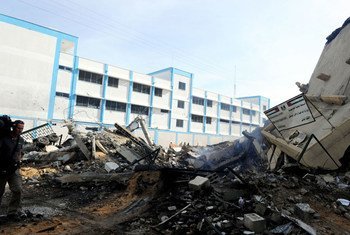 18 November 2012
Secretary-General Ban Ki-moon on Sunday renewed his appeal for an end to the ongoing violence in Gaza and Israel, strongly urging the parties to achieve an immediate ceasefire.