Sierra Leone elections are a ‘turning point’ for the country, says UN envoy

UNDP/A.K.Bah
Biometric voter registration is being used for the first time for the 17 November 2012 election in Sierra Leone.
16 November 2012

As Sierra Leone heads towards its third national elections since the end of its civil war, the top United Nations envoy in the West African country today urged voters to refrain from election-related violence, noting that the vote was a turning point in the country’s post-conflict history.

“These elections are extremely important,” the Secretary-General’s Executive Representative in Sierra Leone, Jens Anders Toyberg-Frandzen, said in an interview with the UN News Centre. “I think the whole world is looking at Sierra Leone at the moment.”

Mr. Toyberg-Frandzen added that while Sierra Leone was observing its third election cycle since the end of hostilities, the present election cycle – which includes four elections, namely presidential, parliamentary, local council and mayoral, to be held on 17 November – would be the first one run entirely by the Government.

“They have full ownership and they will also be held fully accountable for this,” the UN envoy continued, stating that the vote would be “a turning point in manifesting that Sierra Leone has graduated from a post-conflict country to one that is now on a path to development.”

For 11 years, Sierra Leone was torn by a vicious civil war after the rebel Revolutionary United Front intervened in an attempt to overthrow the country’s then-President Joseph Momoh. The conflict, which lasted from 1991 to 2002, was often punctuated by acts of extreme brutality as marauding bands of armed youths terrorized the countryside, conscripting child soldiers and used the amputation of limbs as an intimidation method against civilians.

Asked if he had any concerns about whether tomorrow’s vote could degenerate into violence, Mr. Toyberg-Frandzen noted that there had been “very few incidences of anything” throughout the country and that all the political parties were rallying peacefully.

Nevertheless, he suggested that one would be “naïve” not to assume that the risk did not exist.

“When you have elections in a country like Sierra Leone, with the history that Sierra Leone has had, there are always areas that you keep an eye on,” Mr. Toyberg-Frandzen stated. “There are areas that are more prone to discontent than others. But I think that the preparations made so far by the national stakeholders are very good and pretty robust.”

In a statement issued by his spokesperson yesterday, Secretary-General Ban Ki-moon also encouraged the Sierra Leone electorate to ensure that the vote transpired peacefully.

Describing the vote as a momentous occasion, Mr. Toyberg-Frandzen echoed Ban Ki-moon’s words and called on Sierra Leoneans “to feel free to vote for what you believe in and enjoy the day.”

“I wish the people of Sierra Leone a wonderful election. This is something that we’ve been talking about for so long that I really hope this translates into a joyous day with clear results and that the country moves on into a new era of development,” he said.

Tomorrow’s elections will be the country’s third since the end of its civil war, and the second since the withdrawal of the peacekeeping operation known as UN Mission in Sierra Leone (UNAMSIL) in December 2005 – that mission was replaced by various other UN offices, most recently the United Nations Integrated Peacebuilding Office (UNIPSIL), which focuses on political and development activities. 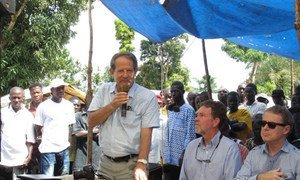 United Nations Secretary-General Ban Ki-moon today strongly encouraged Sierra Leoneans to ensure that national elections on Saturday are carried out peacefully to build on the progress made since the end of the country’s civil war ended a decade ago.