16 November 2012
The largest body of independent experts in the United Nations human rights system today highlighted their concerns about a draft for Southeast Asia’s first ever regional document on human rights protections, which the Association of Southeast Asian Nations (ASEAN) is set to consider on Sunday for adoption.

In an open letter to ASEAN member states, the experts said that adoption of a “credible” ASEAN Human Rights Declaration would represent a “significant step” by the 10-nation bloc to develop a “regional human rights system.”

The letter expresses reservations with the current draft, noting that it is “imperative” ASEAN’s landmark human rights instrument “maintains international standards” if it is to complement the work of the United Nations human rights system.

The experts’ key concerns include provisions in the draft addressing the right to life, a so-called “balance” between rights and individual duties, and conditions restricting people’s rights, according to a news release of the UN Office of the High Commissioner for Human Rights (OHCHR).

“The group of international experts stressed [ASEAN’s] need to reaffirm in their Declaration the duty of States to promote and protect all human rights and fundamental freedoms regardless of their particular political, economic and cultural systems,” OHCHR said, adding the group highlighted that 171 states had adopted this principle by consensus in the 1993 Vienna Declaration, and that ASEAN states had made a “significant contribution” to that effort in the Austrian capital.

The regional declaration is one of the key mandates of the ASEAN Intergovernmental Commission on Human Rights, which the association created in 2009, saying it was intended to “promote and protect human rights and fundamental freedom” of the 600 million people within their borders. Leaders attending the ASEAN Summit in the Cambodian capital of Phnom Penh on Sunday are to consider it for adoption.

For their part, the UN experts drafted their letter as members of the so-called Coordination Committee they created in 2005, under the Geneva-based UN Human Rights Council’s so-called Special Procedures mechanism, which mandates them to independently investigate country specific or thematic human rights issues.

The Coordination Committee effectively amplifies the experts’ individual messages by enabling them to speak as one, and also by giving them an opportunity to collectively coordinate and consult with OHCHR, and the broader UN human rights framework and civil society.

The Committee’s chair, Michel Forst, noting that the main function of regional human rights instruments was to “establish minimum standards” that countries’ domestic laws must meet, indicated that the ASEAN draft declaration might benefit from more input by stakeholders outside government, according to the OHCHR release.

“We call on all ASEAN member States to consult further with the people of the region, including civil society organizations, and to take on board their concerns and aspirations,” he said.

The call reflects an appeal last week by the UN High Commissioner for Human Rights, Navi Pillay, who asked ASEAN leaders to review their work on the draft, and indicated she believed it reflected insufficient input from civil society and other stakeholders.

Mr. Forst said the expert group was on hand to provide further advice to ASEAN in the “historic task” of finalizing the declaration, as he also detailed the group’s concerns with the current draft, the OHCHR news release indicated.

“The right to life, for example, is a fundamental right upon which all other rights depend, and any credible human rights instrument should unconditionally protect it without making it contingent on the provisions of domestic law,” Mr. Forst said.

“In relation to the right to life,” the Committee Chair added, “provisions such as ‘in accordance with national law’ could be used to shield States against scrutiny by international human rights mechanisms concerning the excessive use of force by law enforcement officers, state failure to protect people against non-state actors and the continuation of the use of the death penalty.”

On provisions in the draft declaration that seek to “balance” rights with individual duties, the experts pointed out that wording does not reflect international human rights law, said OHCHR.

“Advocating a balance between human rights and duties creates much greater scope for Governments to place arbitrary, disproportionate and unnecessary restrictions on human rights,” the letter says.

In commenting on the draft’s “legitimate restrictions” provisions on the grounds of “morality,” “public order” and “national security,” Mr. Forst said the experts were “acutely aware of the risk of these terms being used as a pretext by Governments to place arbitrary, disproportionate and unnecessary restrictions on human rights.”

“We strongly encourage the inclusion of language which makes explicit that the restrictions must be provided by law and conform to the strict tests of necessity and proportionality, and that these restrictions may not put in jeopardy the right itself or apply to rights that are non-derogable under international law,” he said, according to OHCHR.

The experts also called on ASEAN leaders to consider in their declaration the issues of statelessness, the right to seek and to enjoy asylum from persecution in other countries, and the international customary law principle of “non-refoulement,” which would guard against the return of people to countries where, for example, they might be subjected to torture.

“Again, such provisions should not be contingent on domestic laws,” said Mr. Forst.

Separately today, OHCHR reported instances of harassment of peaceful activist meetings in Cambodia ahead of the ASEAN summit, saying some discussing human rights issues had been closed down “under pressure from the authorities.”

“The High Commissioner is concerned about the actions of the Cambodian authorities,” OHCHR said in a statement.

It added that at least 60 people had been arbitrarily detained during an “operation to ‘sweep’ Phnom Penh clean of street people” prior to the arrival of heads of government. It also highlighted the arrest of “members of a community protesting their threatened eviction by writing messages on the roofs of their house,” but added that group was later released.

“The summit should be an opportunity for all parts of ASEAN to come together and peacefully share their views,” OHCHR said.

“The actions of the Cambodian Government are not concordant with Cambodia’s human rights obligations or with the values of ASEAN of peace and prosperity for all.” 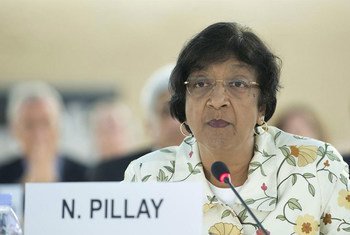 8 November 2012
The top United Nations human rights official today called leaders of the Association of Southeast Asian Nations (ASEAN) to review their efforts to produce the region’s first ever human rights declaration, saying there had been insufficient input from civil society and other stakeholders in the document’s drafting.