There have been 2,100 new arrivals over the past week at the Yida camp, located in Unity state, with over 85 per cent of them women and children, Adrian Edwards, a spokesperson for the Office of the UN High Commissioner for Refugees (UNHCR), told a news briefing in Geneva.

He said that 99 children below five were identified as malnourished and are being cared for –after being registered by UNHCR, refugees go through medical and nutritional screening and receive an emergency food ration; they also receive relief items such as jerry cans and kitchen sets to help them settle.

Since September, thousands of people have been prompted to flee South Kordofan into Yida as a result of renewed fighting between Sudanese Armed Forces and the rebel group known as the Sudan People’s Liberation Army (SPLA-North).

Mr. Edwards noted that newly arriving refugees tell UNHCR staff on the Sudanese side of the border that more people are heading towards the border point of Jau en route to Yida.

“People are worried about insecurity, and reaching the border is difficult. They are moving in small groups in fear of aerial bombardment,” he said. “Based on patterns over the past 12 months and taking into account seasonal cycles, our current planning anticipates further refugee arrivals between now and January due to the onset of the dry season and resumption of military activities in South Kordofan.”

Mr. Edwards added that further surges are also possible for April and May in Unity state and for June in Upper Nile state, and that UNHCR is preparing sites and propositioning supplies to be ready for any influx.

As of last week, there were 175,668 Sudanese refugees in South Sudan from fighting and insecurity in South Kordofan and Blue Nile states. Almost half of these are from Blue Nile. 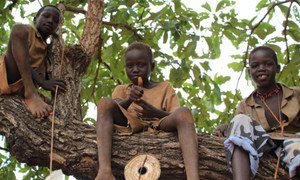 The United Nations refugee agency today said it is preparing to relocate almost 63,000 people living in the Yida camp in South Sudan, where their security is at risk due to their proximity to the border with Sudan’s South Kordofan province where there have been renewed clashes between the Government and a rebel group.