IRIN/Tommy Trenchard
Youths campaign in Freetown ahead of presidential elections on 17 November 2012.

15 November 2012
In calling for “peaceful and impartial” elections on Saturday in Sierra Leone, the component of the United Nations Peacebuilding Commission that deals with the West African country pledged continued support for the Government and the people of Sierra Leone in their “arduous task of building a democratic nation.”

It also noted that the international community views the Saturday elections as a “significant milestone in the country's peace consolidation efforts,” adding that global onlookers have “high expectations that they will be conducted in a peaceful, transparent, and credible manner, thereby serving as an example for the region and beyond.”

Sierra Leone is scheduled to hold four elections – presidential, parliamentary, local council and mayoral – in what is viewed as an important step for a country that is rebuilding after a civil war that ended in 2002.

Sierra Leone is one of the six countries on the agenda of the overall Peacebuilding Commission, itself an intergovernmental advisory body that supports peace efforts in countries emerging from conflict, and considered to be a key addition to the ability of the international community in the broad peace agenda.

While the Commission’s ‘central’ body, called the Organizational Committee, comprises 31 member countries, each of the country-specific Configurations include other participants, such as neighbouring countries, regional organizations, multilateral organizations, financial institutions and representatives of civil society.

On Sierra Leone, the Configuration’s statement said the Commission “strongly believes that the political parties have a serious responsibility to safeguard the progress made since the end of the civil war, and to contribute their part to the successful conduct of the forthcoming elections.”

It added that it welcomed the signing by various registered political parties, national institutions and other national stakeholders of the 18 May 2012 Declaration, which the Configuration said “outlines clear principles for political competition (and) encourages the political parties to fully respect those principles.”

The Configuration highlighted the “relatively calm” election campaign to date, as it also commended the “important role” non-State organizations were playing in “ensuring fair and transparent elections, free of violence.”

It said all “national stakeholders” – but especially the country’s political parties – should “continue making use of existing mechanisms for dialogue and dispute resolution” so that political differences can be resolved, and violence can be averted.

“In that respect, the role of the Electoral Offences Court will be vital for resolution of electoral related complaints and timely acceptance of the results,” the statement said.

The Configuration said that an “increasingly pivotal role” in the coming weeks would be played by the Political Parties Registration Commission (PPRC), which Sierra Leone created in 2002 to register political parties and to ensure that their conduct conforms to the country’s Constitution.

The Configuration added that the PPRC had “already demonstrated its ability to promote inter-party dialogue, manage political tensions, and ensure adherence to the political party code (of) conduct,” as it called on all political parties to “continue their cooperation” with the body.

The Configuration also praised Sierra Leone’s biometric voter registration process, saying it had “helped to enhance the transparency and credibility of the elections.” According to the Configuration, use of biometric technology will “greatly facilitate the conduct of future elections.”

“The National Electoral Commission and its international partners should be commended for their outstanding work in this respect and should continue to ensure that voters and political parties are kept well informed of the ongoing electoral process,” the Configuration said.

Established in 2006, the Peacebuilding Commission plays a key role in bringing together donors, troop contributing countries and other relevant actors. It also marshals resources and helps launch integrated strategies for post-conflict peacebuilding and recovery. 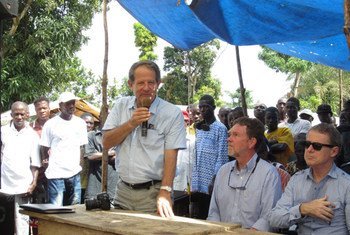 15 November 2012
United Nations Secretary-General Ban Ki-moon today strongly encouraged Sierra Leoneans to ensure that national elections on Saturday are carried out peacefully to build on the progress made since the end of the country’s civil war ended a decade ago.