UN will use internal review of activities in Sri Lanka to do better, vows senior official

UN will use internal review of activities in Sri Lanka to do better, vows senior official

15 November 2012
The United Nations is committed to using an internal review that found that the world body failed to meet its responsibilities during the final months of the civil war in Sri Lanka in 2009 in order to improve how it works and to better serve those in need, a senior official pledged today.

The report by the Internal Review Panel concluded that “events in Sri Lanka mark a grave failure of the UN to adequately respond to early warnings and to the evolving situation during the final stages of the conflict and its aftermath, to the detriment of hundreds of thousands of civilians and in contradiction with the principles and responsibilities of the UN.”

Government forces declared victory over the rebel Liberation Tigers of Tamil Eelam (LTTE) in 2009 after a conflict that had raged on and off for nearly three decades and killed thousands of people.

The Panel, set up by Secretary-General Ban Ki-moon, highlighted in particular the roles played by the Secretariat, the agencies and programmes of the UN Country Team, and the members of the Security Council and Human Rights Council in the final months of that conflict.

Upon making the report public yesterday, Mr. Ban voiced his resolve for the UN to learn from its findings in order to better serve humanity, especially people caught in conflict.

Addressing a news conference at UN Headquarters in New York, the Secretary-General’s Chef de Cabinet, Susana Malcorra, reiterated that determination, adding that this is a moment for “strong introspection” for the world body.

“We are absolutely guided by his decision to look into the recommendations and make sure that we thoroughly review them and implement them to strengthen the system at large,” she stated.

“The report highlights areas of improvement for the system to work and deliver better,” she added, noting that the Organization is in the process of putting together a group of senior advisors to review the report’s recommendations and figure out how to move forward.

The eight-month study by the Internal Review Panel, headed by Charles Petrie – who joined Ms. Malcorra at the news briefing – came in the wake of recommendations made by another body, the Secretary-General’s Panel of Experts, which he set up in 2010 to advise him on measures to advance accountability after the war’s conclusion.

The Panel of Experts’ report raised a number of issues, including those regarding the UN response to the situation facing civilians in the north of Sri Lanka in the last months of the war. It recommended “a comprehensive review of action by the United Nations system during the war in Sri Lanka and the aftermath, regarding the implementation of its humanitarian and protection mandates” – which, in turn, led to the internal UN review.

“It is a very difficult report to read,” Mr. Petrie told reporters, referring to the review’s findings, while adding that the fact that the UN itself was championing the report bode well for the world body.

The report called the Secretary-General’s decision to commission an internal review a “courageous” step, and said that the findings and recommendations provide an “urgent and compelling platform for action.”

“The UN’s failure to adequately respond to events like those that occurred in Sri Lanka should not happen again. When confronted by similar situations, the UN must be able to meet a much higher standard in fulfilling its protection and humanitarian responsibilities,” said the report.

Ms. Malcorra added that the report is “clear proof” of Mr. Ban’s commitment to the principles of accountability and transparency, and that while it is “painful” to realize one’s shortcomings, the UN owes it to itself, and more importantly to those it serves, to find ways to improve and work better in the future. 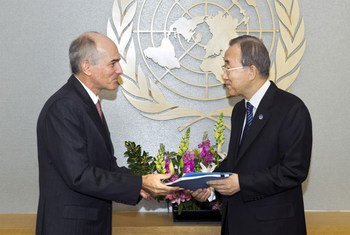 14 November 2012
“The United Nations system failed to meet its responsibilities,” Secretary-General Ban Ki-moon said today as he released a United Nations report looking into the world body’s actions during the final months of the 2009 war in Sri Lanka and its aftermath.