A key rights committee of the United Nations labour agency today identified five countries where it says worker-rights violations – some involving murder – represent the “most serious and urgent cases” among 32 examined at its current meeting.

Argentina, Cambodia, Ethiopia, Fiji and Peru were singled out by the Committee on Freedom of Association of the UN International Labour Organization (ILO) after Committee members reviewed cases involving rights to organize, negotiate through collective bargaining and engage in social dialogue.

The murder or alleged murder of workers or trade union leaders were central to cases drawn from Argentina, Cambodia and Peru, according to an ILO news release on the Committee’s 1-16 November session, held in Geneva.

ILO established the Committee in 1951 in order to examine complaints about violations of freedom of association, whether or not the country concerned had ratified a related international convention. It comprises an independent chairperson and three representatives each of governments, employers, and workers.

“The Committee considers it necessary to draw the special attention of the (ILO) Governing Body to (five country-cases) because of the extreme seriousness and urgency of the matters dealt with therein,” the Committee said in a 400-page report tabled at the meeting.

According to the ILO news release, the Committee dealt with the murder of four workers and injury of two others in Argentina.

“The murders happened during the eviction of over 500 workers demanding decent housing from a construction site in Mar del Plata in 2009,” ILO stated. “The Committee recalled the importance of an immediate and independent judicial inquiry in such cases to clarify the facts, determine responsibility, punish those responsible and prevent the repetition of such acts.”

ILO said the Committee asked the Argentina to “communicate the outcome” of judicial inquiries that are currently underway.

On Cambodia, ILO said the Committee examined the murders of trade union leaders Chea Vichea, Ros Sovannareth and Hy Vuthy between 2004 and 2007.

“Once again, the Committee strongly urged the Government to carry out independent investigations into the assassinations of these union leaders, punish the guilty parties and bring an end to the climate of impunity in the country,” ILO said.

On Ethiopia, ILO said the Committee “regretted” that the country’s National Teachers Union (NTA) had still not been registered, despite depositing its registration request four years ago.

“It strongly urged the Government to ensure that the appropriate authorities register the NTA in order to fully guarantee the freedom of association rights of civil servants, including teachers in public schools,” ILO said.

The Committee asked the Government of Fiji to “rapidly discuss the return of an ILO Direct Contacts Mission” to the country – such missions seek to help countries meet labour standards set by the agency or contained in conventions the country has ratified.

“Last September, the Fijian government had stopped the ILO from carrying out a mission to verify complaints over the lack of freedom of association made by local trade unions,” ILO said.

It added, “The Committee called upon the Government to undertake independent investigations without delay into the allegations of physical assault, harassment and intimidation of trade union leaders and members.”

ILO noted that a case from Peru concerned allegations of murder of a trade union leader in 2008 in clashes with police during a mining sector protest. “As it had not been possible to identify the perpetrators of the act, the Committee asked for further investigations to clarify the facts,” the labour agency said.

Among other cases considered, ILO said the Committee “noted with satisfaction that effect had been given to its recommendations in cases related to the reinstatement of trade union members in Colombia and Peru, and the registration of a trade union in Algeria.”

However, it added the Committee urged Belarus to be “more cooperative” after reviewing measures taken by that country’s Government in response to 2004 recommendations by an ILO Commission of Inquiry. The 2004 inquiry found that trade union rights had been “blatantly violated,” the UN has previously said.

“The Committee deeply regretted that the Government had once again failed to reply to the Committee’s previous recommendations and to the new allegations of freedom of association violations,” ILO said.

In its report, the Committee notes that it currently has 181 cases on file, and examined 32 “on the merits” at this session. Regarding the 181 cases, it adds that it has submitted “complaints… to the governments concerned for their observations.” 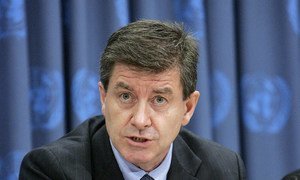 With youth accounting for more than one-third of the world’s 200 million unemployed, Guy Ryder, the new Director-General of the United Nations International Labour Organization (ILO), has called for programmes that specifically target getting young people into jobs.