15 November 2012
The diversity of philosophies prevalent around the world is humanity's greatest asset to building an inclusive and tolerant global citizenry, the head of the United Nations Educational, Scientific and Cultural Organization (UNESCO) said today, marking the tenth edition of World Philosophy Day.

In her message for the Day, UNESCO's Director-General, Irina Bokova, called on nations to invest more in philosophical training for schoolchildren while stressing the “urgent need” to pass on to the world's youth “the taste for philosophy, its rigour and its joys, from the earliest age.”

“UNESCO reaffirms the power of philosophy to change the world, because it can help us to change ourselves by giving weight to our indignation before injustice, lucidity to ask the right questions, and conviction to defend human dignity,” Ms. Bokova said.

“In all these ways, it holds the key to a new humanism,” she added, underlining the significance of philosophy in making “sense of questions of peace and sustainable development.”

World Philosophy Day is celebrated every third Thursday of November since 2002, with the aim of making philosophical reflection accessible to all – professors and students, scholars and the general public – thereby enlarging the opportunities and spaces for the stimulation of critical thinking and debate.

The Day – for which the theme this year is 'future generations' – is being celebrated with a number of events, including roundtables, debates and concerts, held in Paris, where UNESCO is headquartered, and at other venues around the world. In addition, a group of schoolchildren will place messages in a time capsule destined to be eventually opened by children of their own age in the year 2062.

Ms. Bokova pointed out that the philosophical tradition was both a meeting point and a culmination of UNESCO's mandate, providing meaning to the content of culture and science and drawing on the free movement of ideas.

“Beyond all of our differences, we are all equal in the exercise of reason,” she continued. “This is the sure way to build fairer, more equitable societies, sustained by the energy of critical thinking.” 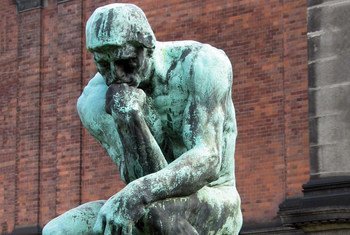 17 November 2011
Philosophy, the exercise of critical thought and freedom of expression, is vital in the search for lasting responses to the challenges of peace and development, a top United Nations official stated as the world body marked this year’s World Philosophy Day.