Two United Nations agencies have partnered with Qatar’s Sheikha Moza bint Nasser to promote education for children living under occupation and in conflict zones, as well as for vulnerable out-of-school children in Iraq.

The partnership agreements was signed today at the launch of Sheikha Moza’s global ‘Educate a Child’ initiative during the World Innovation Summit for Education that gathered over 10,000 participants from 100 countries in the Qatari capital, Doha.

The agreement with the UN Relief and Works Agency for Palestine Refugees in the Near East (UNRWA) sets out a plan to advance primary education for Palestine refugee children, with a special focus on those whose access to school has been hampered by conflict.

“Vulnerable populations know best that primary education is one of the fundamental building blocks of a productive and happy life,” said UNRWA’s Commissioner-General, Filippo Grandi, adding that the new partnership recognized “the urgent needs of these children to be assisted with their education despite the deplorable conditions in which they live.”

Meanwhile, the agreement signed with the UN Educational, Scientific and Cultural Organization (UNESCO) will provide technical and institutional support to scale up the provision of quality education to vulnerable out-of-school children in Iraq. Over 18 months, the project will reach 30,000 children, half of whom are girls.

“Educate a Child goes to where the needs are greatest and operates in a spirit of partnership and national ownership,” said UNESCO’s Director-General, Irina Bokova. “Together, working where educational deprivation runs high, where conflict has torn the social fabric, we will build the capacity of authorities and train teachers to set up and run accelerated learning programmes.”

Addressing the opening of the summit yesterday, Ms. Bokova stressed that education is becoming the big issue of the 21st century.

“If we want to bridge the gap between poverty and prosperity, between tolerance and intolerance, if we want to promote sustainable development and foster global citizenship, education has to be the priority and it is only through partnerships that we will achieve progress,” she said.

Educate a Child aims to significantly reduce the number of children worldwide missing out on their fundamental right to education, and will catalyse innovative learning solutions for the hardest-to-reach children – those affected by extreme poverty, conflict, natural disaster and prejudice.

UNICEF partners with Gulf charity to educate one million children 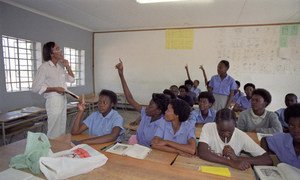 Secretary-General Ban Ki-moon today announced that he has secured $1.5 billion in commitments for a new initiative to increase access to, and the quality of, education for children worldwide.