12 November 2012
Amid the rising threat of extremist elements in Africa's Sahel region, the dispute over Western Sahara must be resolved before lingering hostilities consume the North African territory, the United Nations top official on the issue warned today.

In a press statement released following his visit with the Foreign Minister of Spain in Madrid, the Secretary-General's Personal Envoy for Western Sahara, Christopher Ross, cautioned that the crisis had lasted “far too long” and called any acceptance of the status quo a “serious miscalculation.”

“I am urging the parties to move swiftly into serious negotiations, and I am asking key members of the international community to use their influence to encourage the parties to do so,” Mr. Ross stated, adding that in a region in transition, a conflict such as the one in the Western Sahara “cannot be allowed to stand still.”

The UN has been involved in mediation efforts to find a settlement in Western Sahara since 1976, when fighting broke out between Morocco and the movement known as Frente Polisario, after the Spanish colonial administration of the territory ended. A UN peacekeeping force, known as the UN Mission for the Referendum in Western Sahara (MINURSO) has also been in place since 1991.

The envoy said the current status quo is threatened by developments in West Africa's Sahel region, which has seen the growing presence of Islamist extremists and militants, including a branch of Al Qaida. Recently, in Mali, radical Islamists seized control of the north, where they have imposed an extremist version of Muslim Sharia law and stringent rules targeting women.

The instability and insecurity resulting from renewed clashes in Mali, as well as the proliferation of armed groups in the region, drought and political instability has sparked fears among many in the international community that the Sahel as a whole is on the brink of destabilization.

Mr. Ross pointed out that in this dangerously precarious environment, Western Sahara's festering hostilities risked sparking renewed violence which would be “tragic for the people of Western Sahara and for North Africa as a whole.”

According to the UN official's statement, Spanish officials were “keen” to contribute to the mediation efforts and Mr. Ross noted that he had “benefited greatly” from the exchange with his Spanish interlocutors.

Prior to his trip to Spain, Mr. Ross also met with delegations from countries neighbouring Western Sahara – Algeria and Mauritania – which have been active in establishing confidence-building measures and seeking a solution to the situation.

In addition, the UN envoy will make stops in Paris, Washington, D.C., London and Moscow where he plans to address the issue with his counterparts in those Western capitals before returning to North Africa.

“The conflict must be resolved,” Mr. Ross said, “and I believe that it can be resolved if there is a will to engage in real dialogue and compromise to find a solution that is honourable for all.” 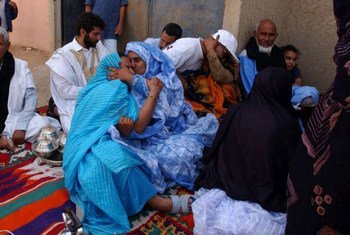 24 February 2012
The next round of United Nations-backed informal talks aimed at reaching a settlement in the Western Sahara dispute will take place next month, the UN announced today.