12 November 2012
The United Nations and the Government of Haiti are seeking close to $40 million in extra funding for humanitarian needs in the Caribbean nation in the wake of the devastation caused by Hurricane Sandy.

“An additional $39.9 million is required to address rising food insecurity, and provide shelter, health services and potable water for more than a million people,” the UN Office for the Coordination of Humanitarian Affairs (OCHA) stated, citing the amount added to more than $110 million sought before Hurricane Sandy struck.

The increase brings the total amount sought to meet Haiti’s humanitarian needs over the next year to a little more than $151 million, according to the Emergency Revision of the Haiti Consolidated Appeal: Needs Arising from the Impact of Hurricane Sandy, released today in Geneva.

Beginning as a tropical storm in late October in the Atlantic Ocean and then evolving as it progressed, Hurricane Sandy grew into what some media reports described as a “once in a generation” storm, causing death and destruction across the Caribbean region and the eastern seaboard of the United States.

In the Caribbean, five million people were affected and 72 people died. In Haiti alone, 54 people died, and hundreds of thousands of people were hit by floods and heavy winds. Along the US eastern coastline and the New York metropolitan area, more than 100 people lost their lives and many families are still without power.

The annual Consolidated Appeals Process (CAP) for Haiti sees Government ministries, UN agencies and non-governmental organizations develop a collective action plan to respond to the extensive humanitarian needs in the country. Haiti is still in the throes of recovering from the devastating 2010 earthquake that left millions homeless. It was also struck by Tropical Storm Isaac in August, while parts of the country have suffered a prolonged drought.

Haiti’s Government says that Haiti’s agricultural sector has “lost a third of its annual production” because of the combination of impacts by Sandy, Isaac and the drought, according to OCHA.

“This is a major blow to Haiti’s reconstruction effort, making life for the most vulnerable Haitians even more precarious,” said the Humanitarian Coordinator in Haiti Nigel Fisher, who also serves as Deputy Special Representative of the UN Secretary-General in Haiti. “In the meantime, international partners’ ability to respond has been reduced by dwindling donor support.”

According to Mr. Fisher, the increased CAP funding is urgently required “to meet both immediate humanitarian needs and recovery efforts.”

The UN Deputy Emergency Relief Coordinator, Catherine Bragg, and the Chargé d’Affaires at the Haitian Permanent Mission to the UN in Geneva, Jean-Bony Alexandre, joined Mr. Fisher in Geneva today in releasing the revised CAP appeal, which follows the UN’s allocation of $4 million in emergency funding for Haiti in Hurricane Sandy’s immediate aftermath.

“The impact of the hurricane has generated a number of critical needs and exacerbated existing ones,” the Executive Summary of the revised appeal states of Hurricane Sandy, which arrived in Haiti as a tropical storm on 23 October.

“Of utmost concern are the 1.5 million people living in severe food insecurity in rural areas most affected by the hurricane,” it adds.

In addition to the impact of Hurricane Sandy, Haiti suffered a further setback on 9 November when heavy rainfall in the northern city of Cap Haïtien left at least 10 people dead and drove thousands from their homes, OCHA noted.

“The hurricane and rainy season in the region lasts until the end of November and pre-positioned stocks to respond to emergencies have been largely depleted,” the humanitarian agency warned.

According to Government figures cited by OCHA, 2,300 people are in shelters after Hurricane Sandy destroyed or damaged 27,701 homes. The storm also destroyed 61 cholera treatment centres at a time when new cases of the water-borne disease are being reported. 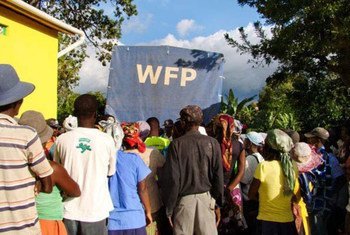 6 November 2012
The United Nations food agency and the Haitian Government are seeking to raise $74 million over the next 12 months to help the country’s agricultural sector recover from the impact of Hurricane Sandy, which hit the Caribbean nation two weeks ago.