Ban concerned by clashes between Syrian forces and opposition in Golan

Secretary-General Ban Ki-moon today expressed concern over reports of clashes between Syrian security forces and the armed opposition in the United Nations-supervised area of Golan, which prompted a response from Israel, and urged both countries to exercise restraint and halt fire.

“The Secretary-General is deeply concerned by the potential for escalation,” said Mr. Ban's spokesperson in a statement. “He calls for the utmost restraint and urges Syria and Israel to uphold the Disengagement Agreement, respect their mutual obligations, and halt firing of any kind across the ceasefire line.”

Golan is an area between Syria and Israel, where the peacekeeping mission known as the UN Disengagement Observer Force (UNDOF) monitors the 1974 disengagement accord between the two countries after their 1973 war. In July, the Security Council agreed to extend the mission's mandate until 31 December this year.

According to media reports, Syrian small arms fire and one artillery round landed in the Israeli-occupied Golan today, prompting a response by Israel. No injuries to civilians or UN personnel in either instance were reported.

On Tuesday the UN Under-Secretary-General for Political Affairs, Jeffrey Feltman warned of signs of the violence spilling over to neighbouring areas.

“The situation inside Syria is turning grimmer every day,” Mr. Feltman said, adding there was a growing risk the crisis could “explode outward into an already volatile region.” 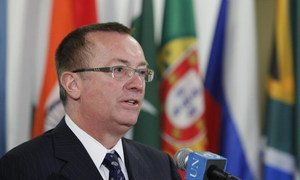