UN-sponsored aid arrives in Cuba in wake of Hurricane Sandy

Arriving from Panama, the flight carrying the supplies marked the UN’s first aid shipment to Cuba in response to the storm, according to a news release from UN agencies and programmes operating in the Caribbean nation, grouped together in an entity known as the UN System in Cuba (USC).

Comprising basic commodities for living, the shipment will be followed by a second 40-ton shipment of similar supplies Saturday, while USC said it was “working with the international community in order to bring into the country additional support.”

“This is the beginning of a process; we will be supporting the city and the provinces in these next months (by) increasing the humanitarian aid so we can cover a larger number of people,” she added, in an interview with UN Radio, conducted from Santiago’s Antonio Maceo Airport as the flight arrived.

The delivery comes after UN Secretary-General Ban Ki-moon spoke with Cuban President Raul Castro to express the world body’s readiness to help the Caribbean island state in the wake of the storm, which struck the country’s eastern area in the early morning of 25 October, killing 11 people, and adversely affecting almost three million others as it brought down numerous buildings and knocked out electricity.

The storm also caused extensive damage in other countries and regions, leading Mr. Ban to write to US President Barack Obama, and to speak with the Presidents of Haiti and the Dominican Republic, as well as the Mayor of New York City, Michael Bloomberg, to express his solidarity with them as he pledged the assistance of the UN, if requested, in the recovery effort, Mr. Ban’s spokesperson said in a note to the media last week.

USC said the aid for Cuba would continue into the mid- and long-term in order to help with recovery and reconstruction in that country.

“The United Nations team agreed to support the country through its emergency funds,” USC said. “In coordination with the Cuban Government, and taking into account the damaged areas, priority assistance will be initially provided to the city of Santiago de Cuba (as) one of the most severely damaged by the hurricane.”

USC said the shipment today was part of a “decisive response” by an array of UN agencies, with funds provided by the UN Office for the Coordination of Humanitarian Affairs (OCHA), the UN Development Programme (UNDP), the UN Fund for Population Activities (UNFPA) and the UN Children’s Fund (UNICEF).

The Governments of Chile and Colombia joined the UN effort, supplying cooking kits and waterproofed canvas for the current shipment, USC noted.

Separately, it added, the UN World Food Programme (WFP) is using its own resources to send a shipment scheduled for arrival in the next ten days.

“Intended to complement basic staples and storage capacities, such assistance amounts to 793 tons of foodstuffs, including 453 tons of rice, 227 of beans and 114 of vegetable oil, in addition to 15 temporary warehouses with a capacity of 500 tons each,” USC stated. 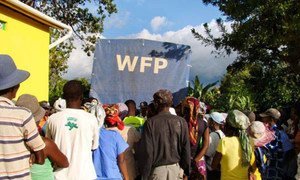 The United Nations food agency and the Haitian Government are seeking to raise $74 million over the next 12 months to help the country’s agricultural sector recover from the impact of Hurricane Sandy, which hit the Caribbean nation two weeks ago.