The United Nations agency which deals with freedom of expression on the Internet today warned that restrictions directly limiting Internet access appear to be on the rise, and called on governments to implement policies that facilitate broadband connectivity instead of putting up barriers particularly during political developments.

“Knowledge and ideas today flow in volumes and at speed that we could not have imagined years ago, ‘regardless of frontier’ and at low cost,” the Assistant Director-General for Communication of the UN Educational, Scientific and Cultural Organization (UNESCO), Janis Karklins, told participants at the Internet Governance Forum (IGF). “However, barriers to this flow still exist, and new ones continue to emerge.”

The Forum, which opened in Baku, Azerbaijan on Tuesday, includes the participation of governments, intergovernmental organizations, business representatives, the technical community, civil society organizations, as well as any individual Internet users interested in Internet governance issues.

According to its website, UNESCO recognizes that the Internet holds enormous potential for development, providing an unprecedented volume of resources for information and knowledge and opens up new opportunities. “The principle of freedom of expression must apply not only to traditional media but also to the Internet and all types of emerging media platforms which will definitely contribute to development, democracy and dialogue,” it states.

“Unwarranted surveillance and violations of the right to privacy have also been inflicted upon Internet users around the world,” Mr. Karklins said. “Many have faced imprisonment, harassment and cyber-attacks. In extreme cases, people who have expressed themselves on the Internet have been killed.”

The constant evolution of the Internet landscape, as well as its trans-national nature, present challenges to legal frameworks, with discrepancies arising in laws in different jurisdictions, Mr. Karklins noted, and warned that freedom of expression must be safeguarded to prevent abuses to this fundamental right.

The UNESCO official also underlined that States must promote accessible Internet connection and inexpensive equipment, as well as media literacy among their citizens.

“Within a multi-stakeholder Internet governance framework, the effective realization of freedom of expression should be considered just as critical as widening access to infrastructure. This is in the interest of individuals, the societies, of governments and the community of nations,” he added, and reiterated UNESCO’s commitment to promoting freedom of expression through traditional as well as online platforms. 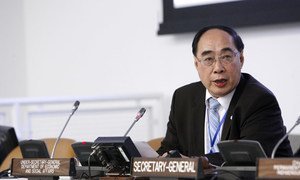 While citing the rapid development and growth of the Internet, a top United Nations official today urged greater efforts to bridge the ongoing digital divide and ensure that everyone around the world can harness its benefits.