Addressing the Security Council, the prosecutor of the International Criminal Court (ICC) today called on Libya’s authorities to ensure that justice is served in relation to any crimes committed during the overthrow of the regime of former leader Muammar al-Qadhafi.

“I encourage the new Libyan government, scheduled to be sworn in tomorrow, on 8 November, to ensure that there is no amnesty for international crimes and no impunity for crimes, regardless of who the perpetrator is and who is the victim,” the ICC’s prosecutor, Fatou Bensouda, told the Council during a meeting on Libya, at UN Headquarters in New York.

She added that her office takes note of two Libyan laws in this regard – one that grants amnesty at the national level for ‘acts made necessary by the 17 February revolution,’ and another which aims to ensure that any act found to be in contravention of international laws and human rights covenants will not be exempt.

Libya has been undergoing a transition toward a modern democratic State after decadesof autocratic rule and toppling of the regime of Muammar al-Qadhafi. Colonel Qadhafi ruled the North African country for more than 40 years until a pro-democracy uprising last year – similar to the protests in other countries in the Middle East and North Africa – led to civil war and the end of his regime.

In her remarks to the Council, Ms. Bensouda also provided an update on the case against Saif Al-Islam Qadhafi, son of the former leader, and Abdullah Al-Senussi, a former senior intelligence official, as well as her office’s ongoing investigation in Libya. Mr. Qadhafi has been indicted by the ICC – which is not part of the UN system – in relation to attacks against protesters and rebels during last year’s uprising.

The prosecutor noted that in 2011 the ICC’s judges had issued arrest warrants for Muammar al-Qadhafi, Saif Al-Islam Qadhafi and Abdullah Al-Sennussi, and how – according to Libya’s National Transitional Council – the arrest warrants played a crucial role in delegitimizing the three men.

“No investigations of these crimes would conceivably have been undertaken by the Qadhafi regime and ICC intervention was, at that time, the only way to establish justice for victims of the Qadhafi regime’s crimes,” Ms. Bensouda said.

In October, judges of the ICC’s Pre-Trial Chamber I convened a hearing to receive oral submissions on the Government of Libya’s admissibility challenge in relation to the case against Saif Al-Islam Qadhafi – centred on whether the case should be heard before the ICC or in Libya. At those hearings, the Libyan authorities asserted that they are investigating the same conduct as that investigated by Ms. Bensouda’s office and now before the ICC.

“It is worth recalling and emphasizing that the Rome Statute gives primary responsibility to national institutions to investigate and prosecute such crimes, with the ICC intervening only if they are inactive or otherwise unwilling or unable to do so genuinely,” Ms. Bensouda told the Council, referring to the statute which establishes, amongst other matters, the ICC's functions and jurisdiction.

She added, “Nonetheless, as the Appeals Chamber has previously held, a State challenging admissibility must provide the Court ‘evidence of a sufficient degree of specificity and probative value that demonstrate that it is indeed investigating the case.’”

The prosecutor’s office, Ms. Bensouda noted, promotes and encourages genuine national proceedings to combat impunity for the most serious crimes of international concern.

“We await rulings of the Court on Libya’s challenge,” she said. “Should the challenge ultimately succeed, my office will monitor those proceedings and cooperate with Libya, to the extent my mandate allows, in order to ensure that they remain genuine.

“If, on the other hand,” she continued, “the Court rules that the case should be heard before the ICC, I will count on Libya’s full support and cooperation to ensure that the ICC’s proceedings are both successful and are seen to be successful by the Libyan public, the first and most important audience for any such proceedings at the ICC.”

In her briefing, Ms. Bensouda encouraged the Libyan Government to redouble its commitment to working with the ICC, as well as its active engagement with the judicial process. “My office appreciates the challenges inherent in the historic political transition underway in Libya – I believe that all can agree that justice must remain a key element of this transition,” she noted.

She called on the international community and, in particular, the Security Council to intensify their efforts to assist the Government of Libya in any way they can to combat impunity and reinforce a culture of the rule of law.

“I believe that by working together, we can help address threats to Libya’s security, both from within and outside, that have been created by past and ongoing criminality, and demonstrate to the Libyan people that the world is committed to assisting them in their efforts to secure justice and lasting peace,” she said, while also calling on Libya’ authorities to make public its comprehensive strategy to address all crimes and end impunity in Libya.

The ICC prosecutor also flagged that her office continues to collect evidence in relation to a possible second case in Libya, noting that no decision has yet been taken as to the focus of that case.

“We continue to collect information on allegations of rapes and sexual violence, which targeted both men and women; allegations against other members of the Qadhafi government for crimes committed during the events of 2011; and allegations of crimes committed by rebel or revolutionary forces, including against the residents of Tawergha, against individuals hors de combat and against detainees,” she said.

Libya is one of seven situations currently under investigation by the ICC, which is based in The Hague. The others are the Democratic Republic of the Congo, northern Uganda, the Darfur region of Sudan, the Central African Republic, Kenya, and Côte d’Ivoire. 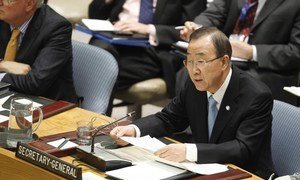 The United Nations Security Council has a vital role to play in assisting the International Criminal Court (ICC) to ensure that war crimes and crimes against humanity around the world do not go unpunished, Secretary-General Ban Ki-moon said today.