“The Secretary-General looks forward to continuing to work with President Obama and his administration in the spirit of the enduring partnership between the United States and the United Nations,” Mr. Ban's spokesperson added in a statement.

“Many challenges lie ahead – from ending the bloodshed in Syria, to getting the Middle East peace process back on track, to promoting sustainable development and tackling the challenges posed by climate change,” the spokesperson noted. “All will require strong multilateral cooperation.”

“The Secretary-General and the United Nations will continue to count on the active engagement of the United States on these and other crucial issues as it strives to meet the hopes and expectations of people around the world,” he added.

♦ Receive daily updates directly in your inbox - Subscribe here to a topic.
♦ Download the UN News app for your iOS or Android devices.
united nations 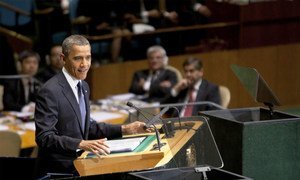 Warning that the world faces “a choice between the forces that would drive us apart and the hopes we hold in common,” United States President Barack Obama said today the deadly violence sparked by an anti-Islam video is an assault on the very ideals upon which the United Nations was founded.