The economic impact of Kenya’s five montane forests – called ‘water towers’ as these forests store water during the rainy season and release it slowly, thus ensuring water flow during dry periods – are assessed in the study, entitled The Role and Contribution of Montane Forests and Related Ecosystem Services to the Kenyan Economy.

In his comments on the report, UNEP’s Executive Director, Achim Steiner, recognized rehabilitation work Kenya has undertaken in the Mau Forest Complex, one of the so-called water towers.

“Kenya is today underlining its determination to be among a group of pioneering countries putting its nature-based assets at the centre of its sustainable development ambitions,” he said.

“The findings of this report are based on the best international analytical methods and the latest environmental and economic evidence,” he added. “It is these kinds of cutting-edge assessments that are inspiring more and more countries in Africa and beyond towards the opportunities presented in a transition to an inclusive Green Economy.”

Ongoing work by KFS, the Kenya National Bureau of Statistics and international partners has additionally found that the contribution of forests to Kenya’s income is undervalued by 2.5 per cent, according to UNEP, which added that this means that forests actually account for an estimated 3.6 per cent of Kenya’s gross domestic product.

The UNEP-KFS report is being launched to coincide with the beginning of the Kenya Water Towers, Forests and Green Economy National Dialogue. It says the five water towers – Mount Kenya, the Aberdares, Mount Elgon and Cherangani complete the list – provide more than 75 per cent of the country’s renewable surface water resources annually, by feeding more than 15,800 million cubic metres of filtered rainwater to rivers and lakes each year.

However, deforestation has occurred from activities such as unregulated charcoal production, logging of indigenous trees, marijuana cultivation, cultivation in the indigenous forest, livestock grazing, quarry landslides and human settlement.

“Between 2000 and 2010, deforestation in the water towers amounted to an estimated 28,427 hectares, leading to reduced water availability of approximately 62 million cubic metres per year,” UNEP stated.

Since Kenya’s economy is highly vulnerable to water availability, inflation spiked above 10 per cent on three occasions between 2000 and 2010, “each time driven by drought combined with increasing crude oil prices and weaker exchange rates,” UNEP said.

Private consumption accompanying a doubling of household demand within the last 10 years has largely driven deforestation, the environment agency noted.

“Fuel wood and charcoal represent the most important energy source for the population, at 75 per cent, and the forestry sector creates both formal and informal job opportunities, especially in rural areas,” UNEP said.

However, it added, while forest products bring in one-off cash to the national economy, they also “encourage illegal deforestation activities and create huge economic damage through the loss of regulating services.”

According to UNEP, the report found that the “cumulative negative effect” of deforestation on the economy through a reduction in regulating services was an estimated 3,650 million shillings per year, which was “more than four times the cash revenue of deforestation.”

Among them is a call for sustainable forest management that UNEP said included selective thinning regimes, protection against uncontrolled settlements, adequate allocation and policing of water withdrawals, and improved management of degraded land. 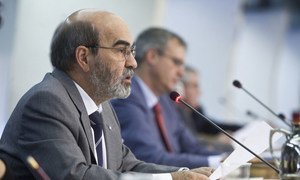