A year after reporting on the devastation caused by the Fukushima Daiichi nuclear accident in Japan, the head of the United Nations International Atomic Energy Agency (IAEA) told the world body’s Member States today that nuclear power is safer than before the disaster.

In a statement to a General Assembly meeting on the UN agency’s activities over the past year, the IAEA’s Director-General, Yukiya Amano, told delegates that the atomic energy watchdog had spearheaded progress in many areas regarding international nuclear safety.

“Measures have been taken to improve protection against extreme hazards such as earthquakes and tsunamis,” Mr. Amano said. “Countries are upgrading their emergency preparedness and response capabilities. Our programme of expert peer review services is being expanded.”

Set up in 1957 and headquartered in Vienna, Austria, the IAEA is the world's centre of cooperation in the nuclear field, working with its Member States and various partners around the world to promote safe, secure and peaceful nuclear technologies.

However, despite the accident and subsequent spread of anti-nuclear sentiment around the world, Mr. Amano noted that the IAEA’s latest projections showed a steady rise in the number of nuclear power plants in the next 20 years, with the majority being constructed in Asia.

At the same time, he reported that established users such as China, India, the Republic of Korea and the Russian Federation had planned “significant expansions” of their respective nuclear programmes.

The IAEA chief also addressed the agency’s continued safeguards activities in the Democratic People’s Republic of Korea (DPRK), Iran and Syria. He noted that the IAEA had “credible information” indicating that Iran had carried out “activities relevant to the development of a nuclear explosive device.”

The Director-General added that his agency remained “firmly committed to intensifying dialogue” with Iran and urged the country to provide clarification regarding the exclusively peaceful nature of its nuclear programme. Iran says the programme is for peaceful purposes of energy production but many countries fear it is aimed at attaining nuclear weapons capability.

Turning to the DPRK, Mr. Amano said he remained “seriously concerned” about the country’s nuclear programme and described its statements about uranium enrichment activities as “deeply troubling.” He called on the Government in Pyongyang to “fully comply with it obligations” and cooperate fully with the UN agency.

In addition, the UN official also underlined the IAEA’s efforts in countering nuclear terrorism, noting that strengthening the agency’s work in this area would remain one of its key priorities.

“Our work focuses on helping minimize the risk of nuclear and other radioactive material falling into the hands of terrorists, or of nuclear facilities being subjected to malicious acts,” Mr. Amano said.

“The IAEA has established internationally accepted guidance that is used as a benchmark for nuclear security,” he continued, adding that the agency was helping countries apply this guidance through specialist training and peer review.

Mr. Amano said that over 12,000 people in more than 120 countries had been trained in nuclear security by the IAEA in the past decade, and pointed to the agency’s recent assistance efforts at the European Football Championships held in Poland and Ukraine last summer.

He also announced that the agency had submitted background documentation ahead of a planned conference on the establishment of a nuclear weapons-free zone in the Middle East slated for later this year.

♦ Receive daily updates directly in your inbox - Subscribe here to a topic.
♦ Download the UN News app for your iOS or Android devices.
IAEA

IAEA board re-appoints ElBaradei to third term as Director-General 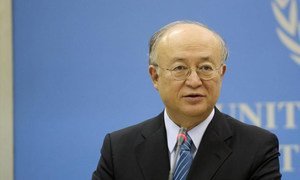 Nuclear security is an extremely important issue for all countries and it is vital that the right lessons are learned from the accident at the Japanese power plant earlier this year, the head of the United Nations International Atomic Energy Agency (IAEA) told Member States.