2 November 2012
An independent United Nations expert today voiced continued concern about the situation in the Democratic People’s Republic of Korea (DPRK), and urged the Government to re-think its focus on military expenditure and to allocate resources to improve the living standards of its people.

“I continue to be concerned with both the human rights and humanitarian situation in the country,” the UN Special Rapporteur on the situation of human rights in the DPRK, Marzuki Darusman, told reporters ahead of his briefing to the General Assembly.

He added that it is very concerning that some 16 million people in the DPRK – of a total population of 25 million – continue to suffer from varying degrees of chronic food insecurity and high malnutrition.

It is also disconcerting, said Mr. Darusman, that the country’s leader, Kim Jong Un, has declared that his first, second and third priorities were to strengthen the military.

“Slow economic growth coupled with what is known as a ‘military first policy’ will of course be detrimental to the welfare of the people of the DPRK,” the Special Rapporteur stated.

The expert urged the Government to re-think its approach to the ‘military-first policy’ and re-allocate enough resources to improve people’s living standards. At the same time, he stressed the need for the international community to provide continued humanitarian support to the people of the DPRK without making the support contingent on any political conditions.

“Overall, during this reporting period, there was no sign of improvement in the human rights situation in the DPRK,” stated Mr. Darusman, who has not been granted access to the country, despite repeated requests, since his appointment in August 2010.

In his report to the Assembly, he focused on freedom of opinion and expression, provisions of the criminal procedure code that are not in line with international standards, the case of Mr. Oh Kil-nam and his family, the situation of asylum-seekers and trafficking of persons, and the economic situation of the people of the DPRK and its impact on economic, social and cultural rights.

Among his recommendations, Mr. Darusman emphasized the need for the Government to ensure the overall protection and promotion of human rights in the country as provided under international human rights instruments, and to cooperate with the Office of the UN High Commissioner for Human Rights (OHCHR).

The independent expert also stressed that “egregious” human rights abuses in the DPRK have been extensively documented by various actors, including UN entities, for decades.

“I wish to call on States and the international community to undertake a comprehensive review of the relevant documents, to assess the underlying patterns and trends, and to consider setting up a more detailed mechanism of inquiry,” he said.

Independent experts, or special rapporteurs like Mr. Darusman, are appointed by the Geneva-based UN Human Rights Council to examine and report back on a country situation or a specific human rights theme. The positions are honorary and the experts are not UN staff, nor are they paid for their work. 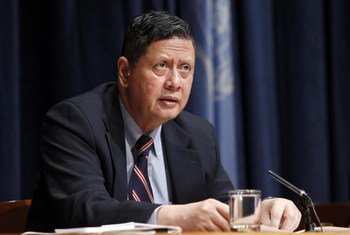 20 January 2012
An independent United Nations expert today urged the new leadership in the Democratic People’s Republic of Korea (DPRK) to address pressing human rights concerns and resolve related outstanding issues, including the abduction of Japanese and other foreign nationals.