The Global Fund/John Rae
Eliminating places where mosquitoes lay their eggs, such as rain water collection barrels, to protect against malaria.

2 November 2012
Growing resistance to a key anti-malarial drug derived from a shrub used in traditional Chinese medicine is threatening to roll back gains made in combating the disease, a United Nations-backed health conference that concluded today in Sydney, Australia, has heard.

Delegates at the ‘Malaria 2012: Saving Lives in the Asia-Pacific’ conference emphasized the importance of strong political leadership and regional coordination after discussing resistance to artemisinin-based combination therapies (ACTs) among challenges in the region’s fight against the disease, the international anti-malaria network Roll Back Malaria Partnership (RBM) said in a press release on the event.

“Anti-malarial drug resistance is one of the greatest challenges to continued success in controlling and eliminating malaria in the Asia-Pacific,” the Director of the Global Malaria Programme of the UN World Health Organization (WHO), Dr. Robert Newman, told the gathering, according to the release.

“There is an urgent need for coordinated action against this public health threat, as called for in the Global Plan for Artemisinin Resistance Containment,” he added, in reference to WHO’s proposals for mobilizing global efforts to contain and ultimately eliminate artemisinin resistance where it has emerged.

Malaria, which is caused by a parasite transmitted to humans through the bites of infected mosquitoes, infects some 216 million people and kills nearly 650,000 people around the world every year, with most of the deaths occurring in Africa.

According to WHO, ACT therapies based on artemisinin – an extract from the sweet wormwood bush used for centuries in Chinese medicine as a fever cure – were designed as combinations of two effective drugs with different modes of action. WHO adds it was thought that they would be effective for many years. However, studies in recent years show that resistance has begun to appear.

RBM said the Asia-Pacific region has traditionally been the epicentre for the emergence of drug-resistant malaria parasites, and warns that a global spread of artemisinin resistance – or its independent emergence in other regions – “could threaten the fragile gains of the last decade.”

“It will be critical to galvanize political action and secure investments to implement an emergency response plan for the Greater Mekong Subregion,” Dr. Newman told delegates, referring to the Southeast Asian river that passes through the countries where artemisinin resistance has emerged.

The conference also saw the release of the study ‘Defeating Malaria in Asia, the Pacific, Americas, Middle East and Europe,’ a joint WHO-RBM initiative that serves as the first report to shine a light on the progress and challenges in the fight against malaria in any region beyond Africa.

“In the face of persistent economic uncertainty and profound changes in the landscape of global development aid, the region needs strong political leadership,” she too emphasized, adding, that it should also “develop financing strategies that include substantive and sustained domestic investment, traditional multilateral and bilateral aid and truly innovative sources of funding,”

Some 34 million cases of malaria claimed the lives of 46,000 people in the regions beyond Africa in 2010, according to the report.

The Asia-Pacific region, which includes 20 malaria-endemic countries, accounted for about 88 per cent (30 million) of these cases, and 91 per cent (42,000) of the deaths, the report adds, saying India, Indonesia, Pakistan, Myanmar and Papua New Guinea bear the largest burden of the disease.

The RBM Partnership was launched in 1998 by WHO, the UN Children’s Fund (UNICEF), the UN Development Programme (UNDP) and the World Bank, in an effort to provide a coordinated global response to the disease.

A global framework to implement coordinated action against malaria, it is comprised of more than 500 partners, including malaria endemic countries, their bilateral and multilateral development partners, the private sector, nongovernmental and community-based organizations, foundations, and research and academic institutions. 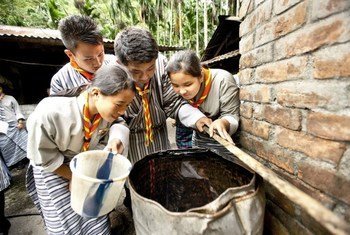 25 April 2012
Secretary-General Ban Ki-moon today called on countries to intensify their efforts to combat malaria, stressing that despite remarkable progress in recent years, much more needs to be done to end the “monumental tragedy” of one child dying every minute from the disease.