UNHCR/S. Malkawi
A Syrian refugee woman holds her child in Jordan's Zaátri camp, where the needs are many.

2 November 2012
The United Nations children’s agency today drew attention to the impact that the conflict in Syria is taking on mothers and children, especially on newborn babies.

Addressing a media briefing in Geneva, a spokesperson for the UN Children’s Fund (UNICEF), Marixie Mercado, reported that, according to local health officials, the ongoing violence continued to impact infant care in Syrian hospitals, particularly among newborns who were increasingly affected by a lack of available incubators.

At the General Hospital in Damascus, Syria’s capital, Ms. Mercado said that out of 21 incubators only 14 were functioning despite a list of over 60 babies waiting to use the remaining accessible machines.

“Health workers said many babies had died because there were not enough incubators,” she told the press briefing.

“Yesterday, the Ministry of Health indicated to UNICEF that 400 incubators were needed across the country,” she continued, adding that overcrowding at the General Hospital was also affecting the children’s ward where 200 patients were waiting for access to 120 beds.

Ms. Mercado warned that the stress of the fighting was especially having a damaging effect on expectant mothers. Citing health workers, she stated that mothers were delivering earlier and that many were also miscarrying while hospitals were experiencing a two-fold increase in the number of Caesarean sections when compared with the same period last year.

At least 20,000 people, mostly civilians, have died since the uprising against President Bashar al-Assad began some 20 months ago. A further 2.5 million Syrians urgently need humanitarian aid, and over 340,000 have crossed the border to Syria's neighbouring countries, according to UN estimates.

There had been expectations that the warring parties in Syria would agree to observe a ceasefire, starting last Friday, in observance of the Muslim religious holiday of Eid al-Adha, in the hope that it would help create an environment that would allow a political process to develop. That ceasefire, however, was not respected as violence continued across the war-torn country through the holiday weekend.

Ms. Mercado told the gathered journalists that while UNICEF had provided relief items to around 60,000 internally displaced persons (IDPs), there was a shortage of school supplies, furniture and teachers for IDP children fleeing the violence.

She added that the UN agency was working to quickly bring in more supplies, including incubators and other winter gear, to cities such as Al-Raqqah and Tartous, as well as others.

Addressing the same news briefing, the spokesperson for the Office of the UN High Commissioner for Human Rights (OHCHR), Rupert Colville, told reporters that a circulated video showing apparent executions would be difficult to verify immediately and required further careful scrutiny.

“The people committing these crimes should be under no illusion that they will escape accountability as there is a lot of accumulated evidence,” Mr. Colville added. 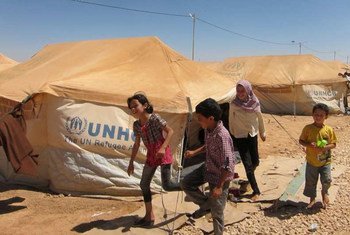 19 October 2012
Efforts to assist the growing numbers of displaced children in Syria are continuing despite the escalating violence across the country and a large funding gap, the United Nations Children’s Fund (UNICEF) announced today.