2 November 2012
Some 1.8 million Haitians have been affected by Hurricane Sandy, the United Nations relief agency said today after its first assessment of the situation in the region, adding that food security remains an urgent concern in the Caribbean nation.

Initial data collected by the UN Office for the Coordination of Humanitarian Affairs (OCHA) showed Hurricane Sandy, which ploughed through the Caribbean country before hitting the eastern coast of the United States, killed 60 people and significantly damaged critical infrastructure such as roads, schools and hospitals in addition to destroying thousands of homes.

“Floodwater had been receding since Sunday but more than 18,000 homes have been flooded, damaged or destroyed,” an OCHA spokesperson, Jens Laerke, told reporters in Geneva, adding that food security remains a main concern as the country is now struggling with the combined impact of hurricanes Sandy and Isaac, which hit in August, as well as drought.

Preliminary data estimated that food security had been severely affected, Mr. Laerke said, with up to two million people at risk of malnutrition.

In addition to food insecurity, OCHA said it is concerned about the nearly 350,000 people that are still living in camps for internally displaced persons (IDPs) as a result of a devastating earthquake which hit the country in January 2010. Mr. Laerke noted that while most vulnerable IDPs in camps that had been evacuated before the storm have returned home, some 1,500 people remain in 15 hurricane shelters.

Because of the impact of the hurricane, OCHA said it is now considering an emergency revision of the Consolidated Appeal (CAP) to accommodate increased needs.

During the same briefing, a spokesperson for the UN World Health Organization (WHO) reported that access to health services and restocking supplies was limited as rivers had become impassable and roads had been obstructed. It also warned that poor sanitary conditions could increase the risk of water-borne diseases such as cholera, which is still endemic in the country.

The WHO spokesperson said there has already been an increase in cholera alerts, especially in the south, and added that field teams are monitoring the situation closely. WHO is also working with the Government in the area to ensure that health supplies could be delivered to treatment centres that had been damaged by strong winds and flooding, he added.

Cuba was also severely affected by the hurricane, OCHA’s Mr. Laemke said, with power cuts affecting more than 890,000 people and nearly 200,000 homes damaged by the storm.

In addition, 375 health centres and several hospitals were damaged, as were 2,100 schools. Crops have been damaged and remote communities are cut off because of road and bridge damage.

UN humanitarian agencies are working closely with national and local authorities, donors and emergency organizations to support national efforts. An emergency cash grant of $100,000 has been approved and a request for the UN Central Emergency Response Fund is under preparation.

Launched in 2006 and managed by OCHA, CERF enables the fast delivery of life-saving assistance to people affected by natural disasters and other crises worldwide. It is funded by voluntary contributions from Member States, non-governmental organizations, regional governments, the private sector and individual donors. 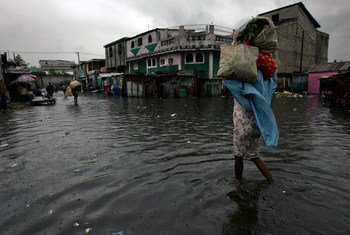 1 November 2012
Pledging the full support of the United Nations in rebuilding efforts, Secretary-General Ban Ki-moon offers his condolences to the millions of people who have been severely affected by Hurricane Sandy – above all those who lost loved ones or their homes across a wide arc of destruction encompassing the United States and the Caribbean region, his spokesperson said today.