UNHCR/H. Caux
A Malian refugee woman in Mangaize, northern Niger. Many Malians have fled to neighbouring countries because of the general insecurity and humanitarian situation in the country's north.
2 November 2012

New data on the number of Malians who have left or been driven from their homes amid conflict and other threats show the total is almost 60 per cent higher than previously thought, the United Nations refugee agency said today.

There are now thought to be at least 203,845 internally displaced persons (IDPs) in the land-locked West African country, up from a previous count of 118,795, a spokesperson for the Office of the UN High Commissioner for Refugees (UNHCR) told a news briefing in Geneva.

The revised figure comes as the agency also highlighted a shortfall in funding it said it needed to help IDPs in Mali, as well as Malian refugees in surrounding countries.

“To date, we have received 41.7 per cent of the $153.7 million we required to assist the Malian refugees and IDPs,” the UNHCR spokesperson, Adrian Edwards, told reporters.

He added that one consequence of the funding shortfall is that UNHCR cannot provide many refugees with recreational and professional activities to ensure they are “meaningfully occupied,” noting that a lack of activities could lead to some refugees – especially the young –

leaving the camps and returning to danger-spots.

“Schools have not started yet in the camps as school structures are still being built,” Mr. Edwards said. “UNHCR fears that without schooling, children and adolescents may return to Mali, where there is a risk of recruitment by various armed groups.”

The instability and insecurity resulting from the renewed clashes, as well as the proliferation of armed groups in the region, drought and political instability in the wake of a military coup d’état in March, have led over many Malians to flee, including some 250,000 people to flee to neighbouring countries in addition to those displaced internally.

The revised IDP estimates come from the Commission on Population Movement in Mali, a working group under the UNHCR-led Protection Cluster framework, which aims to meet the protection needs of IDPs and other affected people globally.

The revised estimates also reflect more accurate counting of IDPs in the capital, Bamako, UNHCR added, praising work done by the International Organization for Migration, a Geneva-based intergovernmental organization. In Bamako, the number of displaced people was estimated to be 46,000 in September, up from 12,000 in June and July.

Mr. Edwards stressed, however, that indications of “actual new displacement” also exist. He cited reports of people fleeing “because of general insecurity and a deteriorating human rights situation in the north of the country, fear of imminent military activity, and because of loss of livelihoods and limited access to basic services.”

The UNHCR spokesperson also spoke of new refugee arrivals in neighbouring countries. In Niger, there were 3,853 refugees in September and October, while in Burkina Faso, last month, there were 1,000.

“For UNHCR and its partners, access to refugees is becoming more difficult in Niger, Burkina Faso and Mauritania,” Mr. Edwards added. “The risk of abductions of aid workers means that our teams have to travel with armed escorts. Frequent security alerts are limiting access to the camps and our ability to assist the refugees.” 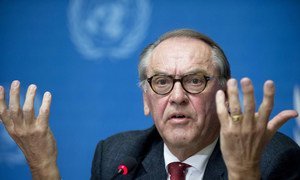 United Nations Deputy Secretary-General Jan Eliasson said today that the lack of a “strong” UN Security Council resolution on the Syrian conflict “weakened” UN efforts to find a peace formula – while also highlighting UN progress following Council unity in dealing with the crisis in Mali and differences between Sudan and South Sudan.