2 November 2012
The United Nations refugee agency today said it is preparing to relocate almost 63,000 people living in the Yida camp in South Sudan, where their security is at risk due to their proximity to the border with Sudan’s South Kordofan province where there have been renewed clashes between the Government and a rebel group.

“We are currently assessing several alternative sites, with a view to relocating people as soon as rainy season conditions allow,” the spokesperson for the Office of the UN High Commissioner for Refugees (UNHCR), Adrian Edwards, told reporters in Geneva.

“Yesterday, UNHCR and the peacekeeping mission, UNMISS [UN Mission in South Sudan], undertook a joint mission by helicopter to explore the suitability and accessibility of potential relocation sites offered by the South Sudan Government,” he added.

Mr. Edwards said UNHCR is in daily contact with the Government regarding the relocation, and, next week, technical experts are expected to design new sites that will be able to house not just current Yida refugees, but also new inflows of people.

Since September, thousands of people have been prompted to flee South Kordofan into Yida as a result of renewed fighting between Sudanese Armed Forces and the Sudan People’s Liberation Army (SPLA-North). However, the town’s proximity to the conflict means that refugees are still at risk, with the recurrent presence of armed personnel in and around the settlement.

“Right now, the safety of the refugees and the civilian character of the settlement cannot be guaranteed,” Mr. Edwards said, adding that the situation is particularly worrying due to the fact that almost 70 per cent of Yida refugees are below the age of 18.

“UNHCR and our partners have established seven child protection committees with the refugee community,” he said. “When children arrive on their own, we ensure they are quickly united with relatives already settled in Yida or are provided foster care to make them less vulnerable.”

The refugee agency spokesperson also stressed that the lack of funding is making it increasingly difficult to address the needs for the 175,000 refugees in the Unity and Upper Nile states in South Sudan.

The UNHCR revised appeal for this year requires $186 million of which only 40 per cent has been received so far, he said, adding that $20 million are urgently needed by January to continue operations.

In September, the UN Security Council voiced grave concern about the worsening humanitarian situation in South Kordofan and neighbouring Blue Nile state and urged the Sudanese Government to expedite the unhindered delivery of humanitarian assistance to the affected civilian populations as rapidly as possible.

The two states have been beset by fighting between the Sudanese Armed Forces and the SPLM-N since last year. The SPLM-N was previously part of the rebel movement that fought for the independence of South Sudan, which seceded from Sudan last year. 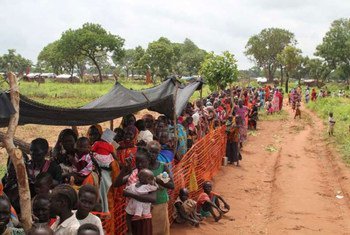 25 September 2012
A return to fighting in Sudan’s Southern Kordofan state between Government forces and a rebel group has unleashed a new wave of refugees seeking sanctuary from the violence, the United Nations refugee agency warned today.