UN Photo/S. Price
Burundi troops serving with African Union in Somalia in new positions in Deynile on the northernmost outskirts of Mogadishu.

2 November 2012
The United Nations Security Council has extended the mandate of the international peacekeeping force providing support to the Government of Somalia in its efforts to bring peace and stability to the Horn of African country.

While most meetings at UN Headquarters in New York City earlier this week had been cancelled due to the impact of Hurricane Sandy – which caused death and destruction throughout the Caribbean region and the eastern US – Council members briefly met on Wednesday to discuss AMISOM’s mandate, which was set to expire on 31 October.

Created and operated by the African Union Peace and Security Council in January 2007, AMISOM received a UN mandate from the world body’s Security Council the following month, and has been renewed ever since.

With close to 10,000 peacekeepers, it is mandated to conduct peace support operations in Somalia, which has been affected by conflict for more than two decades.

In its unanimously adopted resolution, the Council, acting under Chapter VII of the UN Charter, said it had determined that the situation in Somalia continues to constitute a threat to international peace and security in the region, and “decides to authorize the Member States of the African Union to maintain the deployment until 7 November 2012.”

After decades of factional fighting and lawlessness, the East Africa country has been undergoing a peace and national reconciliation process, with a series of landmark steps in recent months that have helped to bring an end to the country’s nine-year political transition period. These steps included the adoption of a Provisional Constitution, the establishment of a new Parliament and the appointments of a new President and a new Prime Minister.

Until last year, most of the country’s capital, Mogadishu, was, for several years, riven by a fluid frontline dividing the two sides – fighters belonging to the Al-Shabaab militant group and troops belonging to the Government of Somalia, with the latter supported by AMISOM.

Since the Al-Shabaab withdrawal from the capital in August last year, the frontlines have been pushed back to surrounding areas. In late September, Al-Shabaab insurgents withdrew from the port city of Kismayo, their last remaining stronghold located a sizable urban area, but still control parts of the country’s south-central areas.

Although the Al-Shabaab has now dispersed into a “rag-tag militia,” it has nonetheless, embarked on more asymmetrical, terrorist and hit-and-run tactics as it occasionally does in Mogadishu, according to the Secretary-General’s Special Representative and head of the UN Political Office for Somalia (UNPOS), Augustine P. Mahiga.

Addressing the Council earlier this month, Mr. Mahiga said that the security situation in Somalia has “vastly improved,” thanks to the continuing efforts of AMISOM, as well as Ethiopian forces and the Somali Government and its local allied forces.

He said it was essential that AMISOM is supported to control more effectively the coastal waters around Mogadishu, Marka, Baraawe and Kismayo, in order to protect its own forces, supply lines, interrupt Al-Shabaab re-supply lines and effectively secure the ports for commercial use.

The African Union has informed the Council that, working together with the UN, it intends to undertake a thorough assessment of AMISOM and how best it can contribute to the stabilization of Somalia in light of the gains made on the ground and the challenges ahead.

Also, earlier this week, Mr. Mahiga condemned, in the “strongest terms,” the latest killing of another media worker in Mogadishu.

The latest victim was a playwright and comedian for the Kulmiye News Network, Warsame Shire Awale, who was shot dead by unidentified gunmen, according to an UNPOS news release.

“This has been the deadliest year for journalists and media workers in Somalia” Mr. Mahiga noted. “The latest killing raised the number of Somali media professionals killed in 2012 to 18.”

On Sunday, a journalist and producer with Radio Shabelle, Mohamed Mohamud Turyare, died as a result of wounds inflicted on 21 October when he was shot in a similar attack.

“I strongly condemn the targeted and persistent assault on Somalia’s media professionals. The world is concerned that none of these murders have resulted in conclusive arrests, investigations and due process or convictions of suspects,” Mr. Mahiga said.

He added, “We renew our offer to facilitate assistance to the Government in addressing impunity and urge the Somali public to assist the Government by providing information, which will expose perpetrators of these violent acts to law enforcement agencies.” 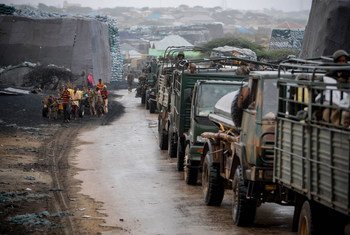