Pledging the full support of the United Nations in rebuilding efforts, Secretary-General Ban Ki-moon offers his condolences to the millions of people who have been severely affected by Hurricane Sandy – above all those who lost loved ones or their homes across a wide arc of destruction encompassing the United States and the Caribbean region, his spokesperson said today.

“The Secretary-General has written to President Obama, and has spoken to the Presidents of Haiti and the Dominican Republic and Mayor Bloomberg of New York City, to express his solidarity at this time of crisis and to pledge the assistance of the United Nations, if requested, in the recovery effort,” the spokesperson said in a note to the media.

“He also intends to speak with other Caribbean leaders and with the Governors of New York and New Jersey,” the spokesperson added. “The Office for the Coordination of Humanitarian Affairs (OCHA) has mobilized to provide maximum possible assistance.”

Described in some media reports as a “once in a generation” storm, Hurricane Sandy has reportedly killed more than 120 people, and caused billions of dollars in damage, in addition to crippling New York City.

Earlier today, an OCHA official said that over a million people in Haiti are facing food insecurity as a result of the hurricane, which ploughed through the Caribbean nation before wreaking havoc along the east coast of the United States earlier this week.

Hurricane Sandy’s arrival, and its effects, in New York City, where the United Nations is headquartered, led to the world body’s offices being closed for an unprecedented three days straight, with most meetings cancelled, before re-opening today.

The UN complex also sustained damage due to high wind and flooding, which affected communications and other infrastructure.

“Despite disruptions, all essential operations went ahead, including a meeting of the Security Council, and contacts with peacekeeping and other missions around the world were maintained without interruption,” the spokesperson noted, adding that UN Headquarters is expected to be back at full capacity “shortly.”

“The Secretary-General notes that when the host country is hit by a natural disaster, the UN family suffers as well. Like our neighbours in the metropolitan area, UN staff members have been affected in various ways by the storm,” the spokesperson stated.

He further highlighted the Secretary-General’s thanks to UN staff for pressing ahead with their work even as they tend to their families' needs, and the UN chief’s encouragement of staff to contribute to relief efforts by volunteering or making financial donations.

“At this time of crisis, the Secretary-General’s thoughts and prayers are with all those in need. He pledges the full support of the United Nations in rebuilding today, strengthening global disaster risk reduction, and preparing the world for a safer tomorrow,” the spokesperson said.

UN chief to visit Ecuador and Peru next week 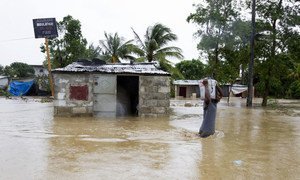 Humanitarian efforts are underway in Haiti following the torrential rains and blustery winds that battered the country over the weekend as Tropical Storm Isaac swept across the nation, the United Nations said today.