1 November 2012
A senior United Nations humanitarian official said today that over a million people in Haiti are facing food insecurity as a result of the devastation caused by Hurricane Sandy, which ploughed through the Caribbean nation before wreaking havoc along the east coast of the United States earlier this week.

The head of the UN Office for the Coordination of Humanitarian Affairs’ (OCHA) operation in Haiti, Johan Peleman, said that relief workers are still consolidating data of the destruction caused by the storm and a full picture of the situation will take some time.

Meanwhile, he noted, between 15,000 and 20,000 people have seen their houses completely destroyed, damaged or flooded as a result of the storm.

OCHA is particularly concerned because Haiti had been hit by a long period of drought this year as well as by another hurricane, Isaac, which hit the impoverished country in August.

“Now with this new tropical storm, we fear that a great deal of the harvest which was ongoing in the south of the country may have been destroyed completely,” Mr. Peleman said in an interview with UN Radio.

“Already, the drought and the previous storm had hit the northern part of the country very badly and we had seen the levels of food insecurity rise there,” he added. “With the south being hit now, we are going to face in the next couple of months very serious problems of malnutrition and food insecurity.”

There are approximately 1.2 million people who are facing food insecurity in the country, which is already the poorest nation in the Western Hemisphere and is still recovering from a devastating earthquake in January 2010.

Mr. Peleman noted that there are still 350,000 people living in camps for internally displaced persons (IDPs) as a result of the earthquake and the effect of Hurricane Sandy on this group was a major concern.

“The most vulnerable IDPs that were living in camps have been evacuated before the storm and we are now, with the humanitarian community and the UN family, repairing tents, handing out new tarpaulins so that they can go back to live in more favourable conditions because a lot of light structures were obviously completely destroyed by the storm,” he stated.

Access is also a concern since a number of roads have been rendered unusable due to the hurricane, making it more difficult to reach those in need, Mr. Peleman added. In addition, water holes and sanitation systems will need to be drained as quickly as possible, given the fear of an outbreak of water-borne diseases, specifically cholera. The disease is still endemic in the country and he expected to now see a surge in the cases of cholera.

Preparations were taken ahead of Hurricane Sandy, in partnership with the Haitian authorities and with the support of the UN peacekeeping mission in the country (MINUSTAH), Mr. Peleman noted, including contingency planning and the pre-deployment of food stocks, tents, tarpaulins, medical kits and hygiene kits.

“The country is relatively well prepared but it is also very vulnerable to this type of disaster, not just because of the poverty but because of decades of deforestation and erosion,” he noted.

In addition, MINUSTAH is also supporting Government efforts to deal with the hurricane’s aftermath, responding to requests to help with logistics and engineering, such as the clearing of roads.

Hurricane Sandy also caused deaths, damage and destruction along the east coast of the US, including in New York where the UN is headquartered. The world body’s offices were closed for an unprecedented three days straight, with most meetings cancelled, and re-opened today. 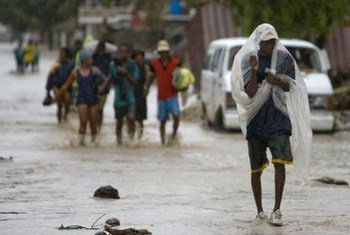