UNHCR Myanmar
UNHCR has distributed relief supplies to tens of thousands of people in communities affected by the unrest in Rakhine state.
25 October 2012

In the wake of renewed violence, United Nations Secretary-General Ban Ki-moon has urged the authorities in Myanmar to take action to bring an end to the lawlessness currently affecting the north of the Asian country’s Rakhine state.

In the wake of renewed violence, United Nations Secretary-General Ban Ki-moon has urged the authorities in Myanmar to take action to bring an end to the lawlessness currently affecting the north of the Asian country’s Rakhine state.

“While the Secretary-General notes the clear recognition at the highest political levels in Myanmar of the need to contain this communal violence, he calls on the authorities to take urgent and effective action to bring under control all cases of lawlessness,” Mr. Ban’s spokesperson, Martin Nesirky, said, describing the most recent outbreak of communal violence in five townships in northern Rakhine as “deeply troubling.”

According to media reports, Government officials have said that at least 56 people have been killed and hundreds of homes torched since Sunday in Rakhine state, located in western Myanmar.

In June, serious disturbances – between ethnic Rakhine Buddhists and Rohingya Muslims – led to the Government declaring a state of emergency there. The violence reportedly left at least a dozen civilians dead and hundreds of homes destroyed, while internally displacing tens of thousands of people.

“The widening mistrust between the communities is being exploited by militant and criminal elements to cause large-scale loss of human lives, material destruction, displaced families as well as fear, humiliation and hatred affecting the people from all walks of life,” Mr. Nesirky noted in his statement to the media.

He called for a stop to vigilante attacks, targeted threats and extremist rhetoric, warning that if this is not done, “the fabric of social order could be irreparably damaged and the reform and opening up process being currently pursued by the government is likely to be jeopardized.”

“Myanmar is striving to be an example of tolerance and moderation in Asia and the world. Such events must not be allowed to tarnish its efforts,” Mr. Nesirky added. “The United Nations is ready to do whatever is necessary to alleviate the situation and bring tranquility and harmony to the region.”

In early October, four months after inter-communal violence erupted in Rakhine state, the Office of the UN High Commissioner for Refugees (UNHCR) had said that the number of internally displaced persons (IDPs) there continues to rise, with some 75,000 people living in camps and many more in need of humanitarian assistance. 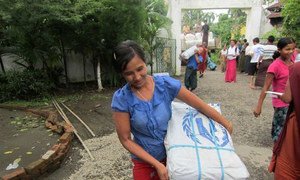