25 October 2012
United Nations Headquarters in New York sang and danced to the music of award-winning artist and humanitarian Stevie Wonder and other renowned musicians on Thursday evening, during a concert to celebrate the world body’s 67th anniversary.

Mr. Wonder, who is also a UN Messenger of Peace, performed his well-known ‘Happy Birthday’ song, as well as some of his best known hits, to a General Assembly Hall full of enthusiastic UN staff, members of the diplomatic community and guests, in observance of UN Day, observed annually on 24 October. The date marks the anniversary of the entry into force of the UN Charter in 1945.

“Everybody knows about the famous Seven Wonders of the World. But we know there is an eighth wonder – Stevie Wonder!” Secretary-General Ban Ki-moon said in his remarks at the concert last night.

“His songs fill us with optimism and hope. His sound carries our spirits to new heights. And his voice expresses caring, happiness and love. We are all inspired by Stevie Wonder’s amazing music. But for the United Nations and people around the world, he is even more than an artistic legend. He is a towering humanitarian,” Mr. Ban said.

Mr. Wonder has advocated for the work of the United Nations since 2009, when he was appointed a UN Messengers of Peace, with particular focus on championing people with disabilities.

UN Messengers of Peace – who are widely recognized for their talents in the arts, academia, literature, sports and entertainment – help raise worldwide awareness of UN ideals and activities. Through their public appearances, contacts with the international media and humanitarian work, they aim to expand public understanding of how the UN helps to improve the lives of people around the world.

The other performers at the 2012 United Nations Day Concert – entitled ‘A Message of Peace, featuring United Nations Messenger of Peace Stevie Wonder’ and which took place at the UN General Assembly Hall – included Janelle Monae, Sting and Valerie Simpson, amongst others.

The 90-minute concert was streamed live by the UN website, allowing people all over the globe to join in the celebration of the world body’s work in the areas of humanitarian assistance, gender equality, human rights, peacekeeping, and economic and sustainable development, among others.

“Tonight [Mr. Wonder] gives us the gift of an unforgettable concert in celebration of our UN – the UN that stops wars and promotes peace, the UN that stands up for human rights and works to bring down poverty, hunger, disease and suffering,” Mr. Ban said in his remarks.

“Tonight, we are ready to sing, dance and clap our hands. And tomorrow, we continue to forge a better world for people everywhere, and for our future as a human family,” he added. 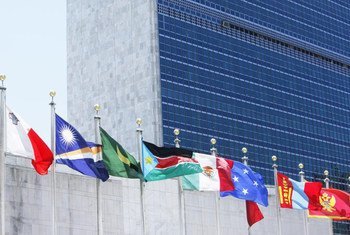 24 October 2012
On the occasion of United Nations Day, Secretary-General Ban Ki-moon today called on individuals and the international community to reaffirm their commitment to building a better world, while also highlighting the importance of cooperation in these efforts.